LEE is an instrument which measures the energy spectrum of comic ray electrons. In the picture at left we can see a scheme of it (click to enlarge). It detects incoming electrons with 3 plastic scintillators (T1, T3 and G in the drawing) the last one for anticoincidence and a gas Cherenkov detector (T2). It measures the electron energy in a cesium iodide (T4) and leadglass (T5) calorimeter. Another Scintillator (T6) also assists in particle identification and energy determination by counting the number of particles that escape the calorimeter.

The observations from LEE provide one of the few more precise measurements of the electron spectrum over an extended period of time. 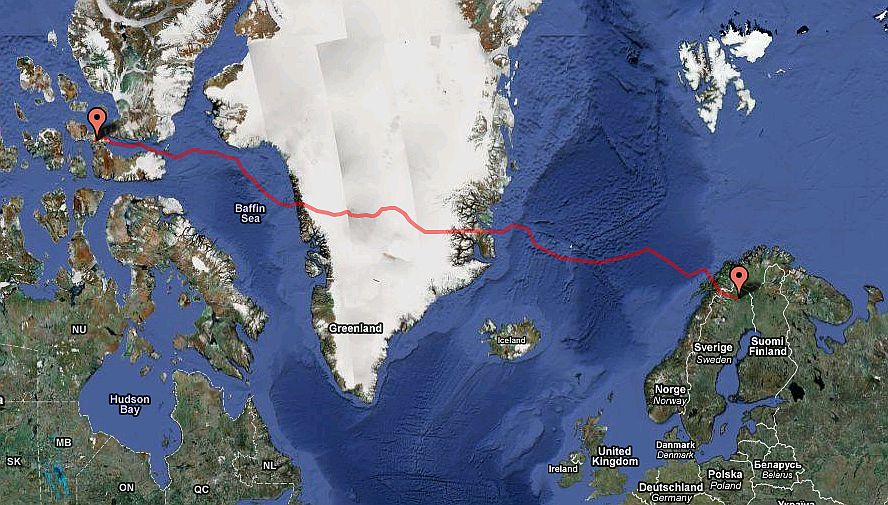 The balloon was launched by dynamic method at 2:26 utc on May 17th under near perfect meteorological conditions, and after an initial ascent phase it reached a height of 43.5 km wich according sources from the Swedish Space Corporation was a record with such a heavy payload (about 600 kg of the payload and the entire flight train).

Once at float altitude the balloon started a westward flight path crossing over Sweden and Norway and then entering in the Atlantic Ocean at a stabilized flight height of 41 km.

The mission endured 4 days, 10 hours, and 56 minutes until termination which ocurred at 12:29 utc on May 21. The termination and parachute cutaway were successfully performed using MIP/Iridium procedures, as adverse cloud cover in the termination area prevented use of the chase aircraft. The payload landed in Devon Island in the north of Canada and was recovered days later in its entirety with a single Twin Otter trip to the impact site.

The science group reported excellent data collection throughout the flight. The primary science objective of the flight was to make a definitive determination of the cosmic electron energy spectrum from below 50 to above 5GeV during a Solar Minimum A-magnetic polarity to compare the previous determinations. The results would also provide an important cross-calibration reference for measurements obtained from orbit by the PAMELA instrument launched in June 2006.