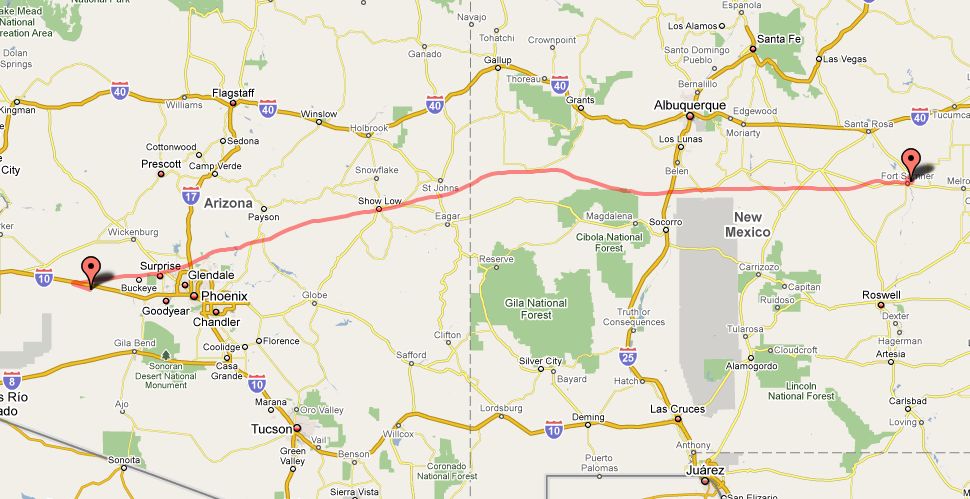 The balloon was launched by dynamic method with assistance from launch vehicle (Big Bill) at 14:48 utc on September 11.

After a nominal ascent phase it reached the float altitude of 124.000 ft starting a westward stable route entering in Arizona 14 hours later.

The mission was terminated at 5:35 utc on September 12. The payload landed with minor damage 45 nautic miles west of Phoenix, Arizona.

This fourth flight of the platform included the following experiments:

A module devoted to perform several experiments a new data storage unit that will require minimal communication relying on discrete power up and down commands to be used on future CubeSat satellites; a solar cell experiment to test the spectral response of an ultra-thin stimulator in an Indium Tin Oxide-Si cell; and finally a thermal experiment designed to calculate the atmospheric effect of at least two thermally dissimilar materials measuring their contraction and expansion (Hawk Institute for Space Sciences / UMES)

A test bed of multi-mission satellite subsystems for future proposed Nanosat class spacecraft This experiment will provide calibration of sun photometers which are critically dependent on the extraterrestrial (ET) constant, i.e. the intensity of sunlight at the top of the atmosphere using an array of detectors and, measurement of the downwelling infrared radiation caused by the major greenhouse gases aside from water vapor using an IR thermometer. Also a position/attitude determination module will be included (Embry-Riddle Aeronautical University).

Flying InfraRed Experiment for Lunar Investigation (FIREFLI) - a look-down infrared camera as a proof-of-concept for a potential lunar mission experiment. The camera will capture images of thermally radiating surfaces throughout the mission. Due to the differing thermal properties of materials, the resulting images can be used to determine the composition of the surface (Virginia Tech).

University of Maryland Advanced Balloon Communications Experiment (UMD/ABC) - A lightweight, low power prototype downlink telemetry/uplink commanding system suitable for use in students balloon flights. During past missions the system demostrated reliable up and down communication for a range in excess of 400 miles using less than one watt of onboard power.

Cajun Probe I - A prototype instrument package incorporating temperature, humidity, pressure, and background radiation sensors as well an accelerometer, and GPS that provides benchmark data for the development of a future probe capable of being injected with a rocket or balloon at high altitude into a hurricane. Such a probe could provide a more complete vertical storm profile than is possible with current lower altitude probes. (University of Louisiana - Lafayette)

Detection of ozone and nitrogen oxides in the stratosphere using nanocrystalline sensor arrays - The goal of the experiment is to test in flight a series of miniature ozone and nitrogen oxide gas sensors and to determine the profile of these gases as a function of altitude. The experiment was developed as a collaboration between students of the University of North Florida (UNF) and the University of North Dakota (UND). UNF developed the nanocrystalline ITO thin film gas sensor array while UND developed the balloon payload electronics and mechanical systems necessary for the readout, telemetry and control of these sensors.

Distant Aerial Cosmic Radiation Acquisition Package - An experiment to measure and classify cosmic radiation energy in the Earth's atmosphere at various altitudes and various sunlight exposures over a specified flight time. The main components of the package include a scintillation detector, comprised of a Sodium Iodide (NaI) crystal and a photomultiplier tube, a voltage divider, and a multi-channel analyzer. These components are controlled via a single board computer (SBC) and throught an analog-to-digital conversion circuit the data obtained can be stored on a memory card (West Virginia University).

MRE II - Microwave Reception Experiment - a project that focuses on characterizing the microwave background at stratospheric altitude in the frequency band between 45 and 75GHz including the understanding of possible interferences in higher frequency bands. A secondary goal of this experiment is testing the system for a possible future cryogenic HASP mission designed specifically to detect the Cosmological Microwave Background (CMB). MRE II will use the latest passive microwave reception technology on the smallest scale ever attempted to capture and analyze these waves.

High Altitude Particle Detection and Collection Experiment - An instrument designed to determine the concentration, size distribution and chemical composition of particles in the upper atmosphere. It uses a passive collection system which is opened only during float to capture particles that fall on the collection surface along with a laser particle detector employed to measure particle size and number density in real time throughout the flight (Montana State University).

Balloon Observatory for Wavelength and Spectral Emission Readings (BOWSER) - designed to study the feasibility of balloon-borne astronomical observatories. The payload includes multiple camera equipped telescopes for capturing stellar field images to assess 'seeing' conditions at balloon altitudes during day and night periods as well as multiple spectral emission sensors to assess the optimum wavelengths for such observations. In addition, the payload is equipped with a magnetometer, an accelerometer and a gyroscope to investigate the balloon platform stability and orientation (University of Colorado).

Second Look Intelligent Calibration Cameras System (SLICC) - An experiment designed to compare CCD and CMOS digital imagers in a near space environment for future use in the determination of the attitude of a spacecraft (Texas A&M University).