Developed by Centre for Atmospheric Science, Department of Chemistry, University of Cambridge 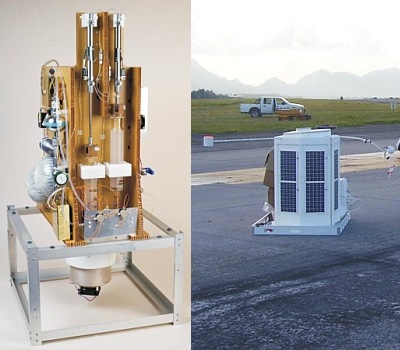 µDIRAC which stands for Determination In situ by Rapid Analytical Chromatography was a gas chromatograph with electron capture detector which made in situ measurements of halocarbons. It was developed by the Centre for Atmospheric Science at the University of Cambridge with portability, power efficiency and autonomy as critical design requirements to allow it's use on CNES long duration Montgolfier Infrared (MIR) balloons. It evolved from two other developments of the same group (DESCARTES and DIRAC) whose CFC measurements have been used for the estimation of Arctic ozone loss and its effect on mid-latitudes, and for satellite validation in the 1990/2000 decade.

At left we can see an picture of the instrument and the gondola that housed it for long duration missions under MIR balloons. The core gas chromatograph (GC) was modular in design and consisted of an inlet manifold for selection of sample/calibration air or helium purge gas; a sample adsorption/desorption system; a temperature programmed column for separation and an electron capture detector (ECD) for detection. Nitrogen and helium carrier gases were pressure-controlled as was the detector cell. Sample/calibration air passed through an adsorbent tube which removed halocarbons from the flow stream. After the sample has been collected, the adsorbent tube was flash heated and the desorbed halocarbons were passed through a chromatographic column with temperature and flow programming capability. After separation in the column, the target compounds passed through the ECD. The absolute calibration was determined by reference to calibration standards prepared by the National Oceanic & Atmospheric Administration (NOAA) at the Earth System Research Laboratory (ESRL). The overall time resolution was determined by the optimised GC method and was typically 8~15 min depending on the range of species being measured.

The gondola (supplied by CNES) provided protection during launch, thermal insulation, power and communication throughout the entire mission. Primary power came from lithium cells together with a nominal 24 V electrical supply from 6 solar panels. During daylight the solar power was configured to heat the detector oven. The core GC, pump and gas supply were all supported on an armature constructed from light weight honeycomb composite sheet. The instrument was housed inside the CNES polystyrene gondola which also contained the lithium battery packs and communications module. The column oven was located in the base of the gondola to assist in rapid cooling of the column at the end of each chromatogram. The overall weight of the MIR instrument (core instrument, pump and gas packs) was ~11 kg.

Each balloon profile was initiated by sunrise or sunset and the instrument needed to anticipate these events by one hour. On receiving a "wake-up" command from the CNES payload service board (PSB) the instrument became active, temperature and pressure set points stabilise and a calibration run was made. As each run was completed, data was passed to the PSB module for upload to the INMARSAT satellite network. Through commands input in CNES control center in Toulouse, the PSB was able to switch the instrument between 7 different operating modes. The PSB was equipped to turn the instrument on or off.

The balloon used as platform for this mission was the so called Infrared Montgolfier (MIR) developed by the Service d'Aéronomie of the CNRS and CNES in 1977 in an attempt to meet the needs of long-duration flights. The MIR was a hot air balloon of natural shape "open at the bottom" made of 2 different materials: a top part of aluminized Mylar 12 µm thick making a cavity for absorbing ascendants infrared and block any re-emission toward the sky and the bottom part made of linear polyethylene 15µm thick, an infrared transparent material and tough at cold (-80°C). It only used helium to gain altitude at takeoff. Their reflective cover provided lift heating the air inside the envelope by the sun during the day or by the infrared radiation coming from the earth during the night. During the day, the MIR flew at an altitude of about 32 km to 38 km while at night it floats between 20 and 24 km depending on the infrared flux radiating from the overflown area and the temperature of the air parcel. It was able to carry a scientific payload of about 50 kg. 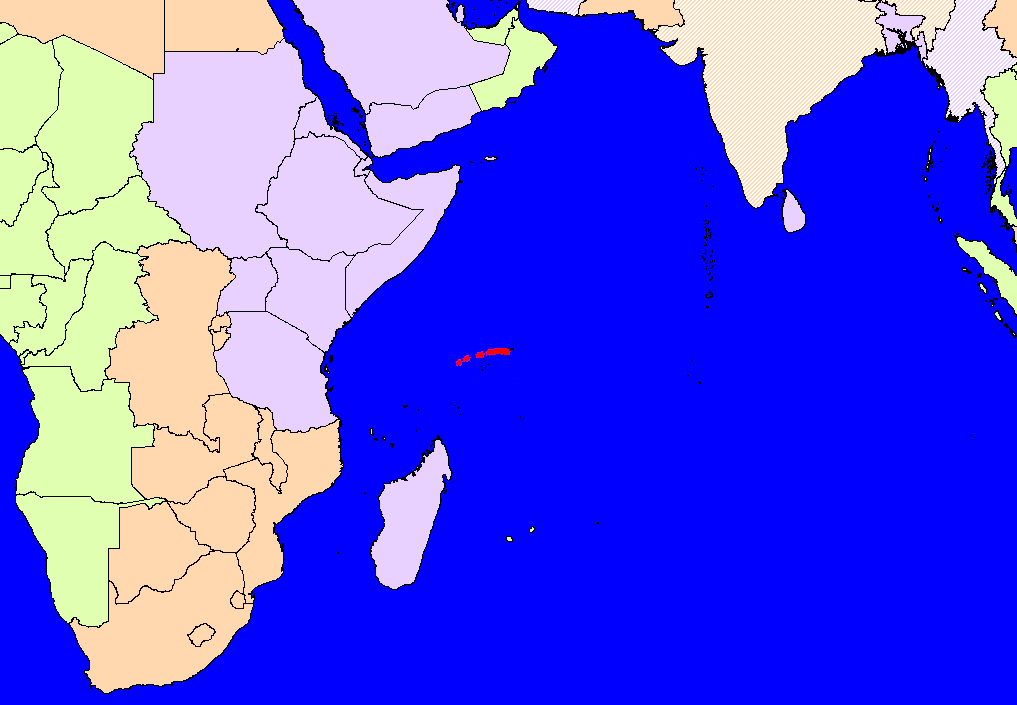 The balloon was launched at 15:11 utc on 17th February 2008, from Mahe International Airport in Seychelles. After a nominal ascent of 2 hours and 16 minutes it reached float altitude of 37.2 km at 17:27 utc that same day. Once at altitude, it headed west across the Indian Ocean towards the East African coast some 1600 km distant. The instrument was programmed to remain in standby mode during the night and to start the first sampling sequence at dawn. However, on the first morning, a serious communication problem developed between the ground control station and the CNES balloon flight control gondola. For several hours CNES personnel attempted to regain communication and control of the balloon but with no success. At 8:07 utc on February 18, an automatic timer triggered a cut-down of the balloon (standard safety practice in the event of a major communication failure). The equipment below the balloon descended by parachute and impacted the Indian Ocean at 5.80º S, 46.82º E. No recovery attempt was possible at short notice and the instrument was lost.

No µDirac sample data were recovered as the communication failure occurred before the end of the first sampling sequence. In addition, no system or calibration data were recovered and so it was not possible to assess technical performance in terms of precision, altitude sensitivity dependence and stability of response curves.