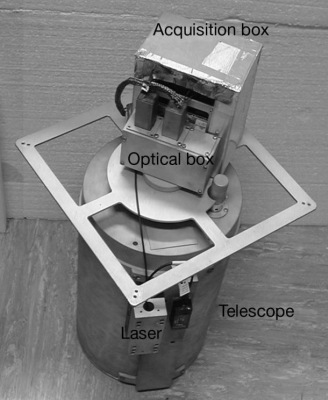 MULID (also known as µLIDAR) is the first balloon-borne lightweight microlidar. It has been developed by a team of Ente per le Nuove tecnologie, l'Energia e l'Ambiente (ENEA) which depends on the Italian Consiglio Nazionale delle Ricerche. It was built to further advance the knowledge of the atmospheric environment below the cirrus cloud level.

At left can be seen the MULID payload during the assembling phase. The squared structure on the top is necessary to sustain the carbon fiber and mylar reflecting shield. The optical box is mounted near the focal point of the telescope (click to anlarge). MULID is based in the so called "Microjoule concept" that implies the use of a lidar with small pulse energy and large repetition rate in a system prepared to fly for several weeks unattended, at very low temperatures and with large day/night temperature variations inside the gondola. The instrument have the capability to measure the depolarized signal backscattered by cloud particles. Such measurements are easily linked to phase and dimension of the scattering particles.

It's light source is a solid state laser of 1.5 µJoules of power that operates at a repetition rate of 1 kHz and at a wavelength of 532 nm. In case of long duration balloons a second spare laser is available to doubling system lifetime. The receiver is composed by a Newtonian modified reflector telescope with a parabolic primary mirror Aluminum coated of 200 mm with a focal length of 300mm. The detector is composed of two Hamamatsu 5783p photo-multipliers modules used to collect the backscattered light and to divide it according to its wavelength. The sensors are used in photon counting mode to increase the Signal to Noise Ratio (SNR). The signal coming from photon-multipliers is sent to an electronic device that eliminates low amplitude events caused by thermal background, and reshapes the other pulses to a TTL level (discriminator). The DSP receives the signal and uses its memory as a shift register for the profile. In order to avoid multiple counts of a single event, a synchronization between photon pulse and DSP trigger is performed at this stage. DSP sums the whole profile bin by bin over an interval set by the user (normally 30 s). After the integration period the summed profile is sent to the PC where is stored on a solid state memory (2 MB). The use of a 40 MHz DSP allows to average profiles at the laser firing frequency (1.1 kHz).

Signal acquisition is based on Texas Instrument digital signal processors (DSP), characterized by a very low power consumption. The DSP is driven by a MS-DOS based PC104 computer. A pack of commercial alkaline batteries is used as power supply during short duration flights while Lithium batteries are preferred for long duration flights. The whole system (weighting 4 kg) is enclosed in an insulating polyurethane shield to reduce heat exchange with external environment and externally covered by a reflecting Mylar microfilm. The gondola final weight including batteries and balloon control systems is of 10 kg.

The balloon used as platform for this mission was the so called Infrared Montgolfier (MIR) developed by the Service d'Aéronomie of the CNRS and CNES in 1977 in an attempt to meet the needs of long-duration flights. The MIR was a hot air balloon of natural shape "open at the bottom" made of 2 different materials: a top part of aluminized Mylar 12 µm thick making a cavity for absorbing ascendants infrared and block any re-emission toward the sky and the bottom part made of linear polyethylene 15µm thick, an infrared transparent material and tough at cold (-80°C). It only used helium to gain altitude at takeoff. Their reflective cover provided lift heating the air inside the envelope by the sun during the day or by the infrared radiation coming from the earth during the night. During the day, the MIR flew at an altitude of about 32 km to 38 km while at night it floats between 20 and 24 km depending on the infrared flux radiating from the overflown area and the temperature of the air parcel. It was able to carry a scientific payload of about 50 kg. 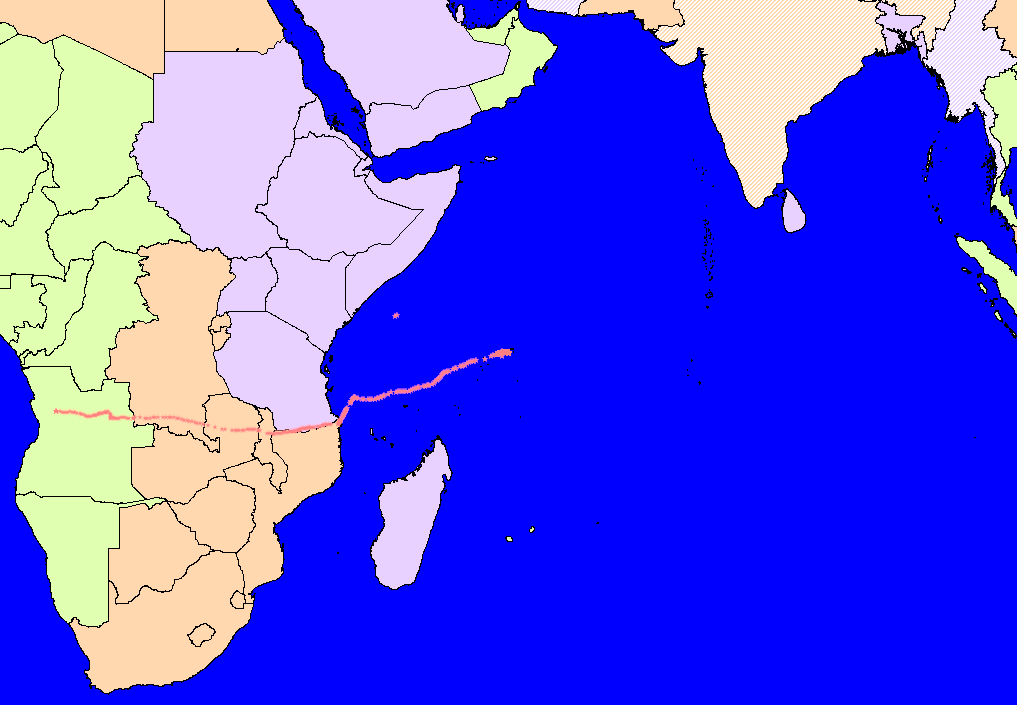 The balloon was launched from the Seychelles International Airport in Mahe on February 15, 2008 at 16:25 utc. After a nominal ascent of 2 hours and 20 minutes it reached float altitude of 38 km at 18:45 utc that same day. Although intended to be a long duration mission, the flight ended over Angola, Africa at 16:04 utc on February 20, 2008 after traveling more than 4900 kilometers in three days of flight. The unexpected balloon failure was due to a probable collision.

Only 2,5 nights of measurements were obtained. Despite the unexpected short flight µLID proved successful and capable of yielding useful atmospheric data. The thermal control worked better than expected paving the way for a reliable long-duration platform and to obtain additional funding for further development and campaigns.