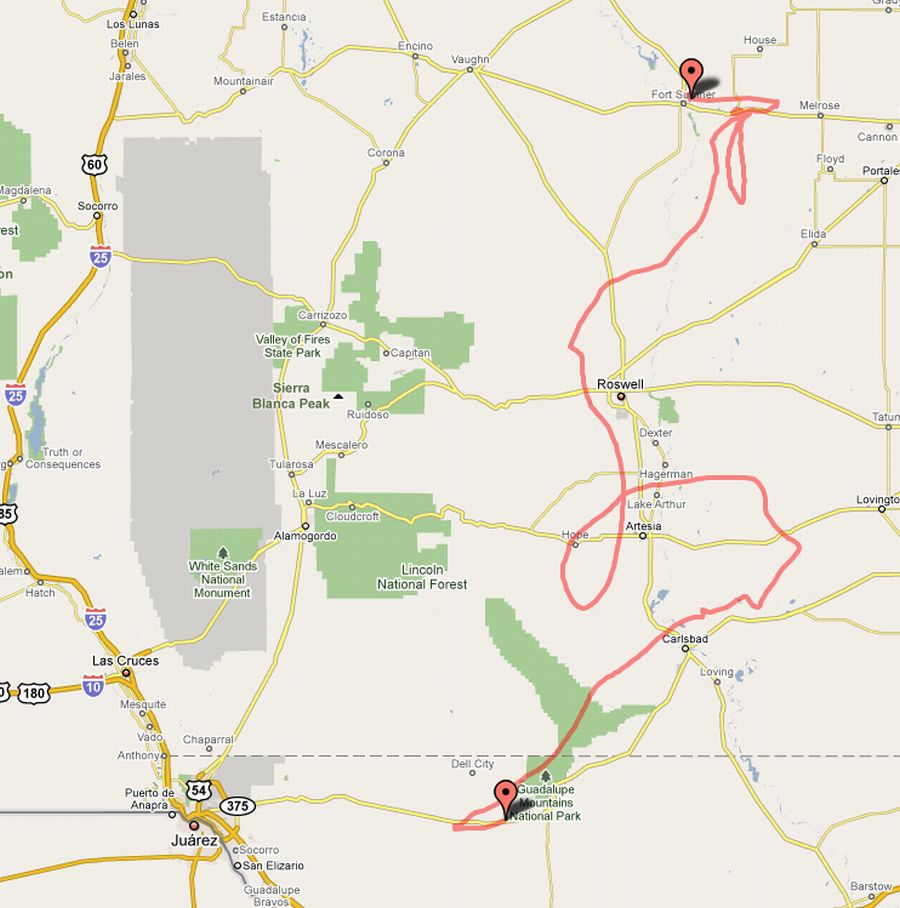 The balloon was launched by dynamic method at 7:30 mdt, on September 15, 2008. After an initial ascent phase the balloon reached float altitude of 122.400 ft at 9:36 MDT and acquired a rather weird flight pattern tipical of the "turn-around" period which is caracterized by a great instability and fluctuation of the high altitude currents. A detailed map of the balloon route can be seen at right (click to enlarge).

Althought initially was considered the posibility of finishing the flight earlier (due to the fact that the balloon was aproaching zones of risky landing) its termination was delayed until 17:23 MDT on September 16th. The payload impacted at 18:00 MDT in a point between Carlsbad and El Paso in Texas.

During the day several residents from Roswell as well from the El Paso city sighted the glowing balloon generating some UFO reports into the media.

This third flight of the platform included the following experiments:

A module devoted to perform several experiments including to compare a space-rated solar cell and a terrestrial solar cell; Cells or photodiodes on each side for HASP orientation; digital camera for orientation, altitude, ground track, and algorithms applicable to processing photos taken from low earth orbit; triaxial accelerometer for recording flight events, and to analyse the responses of Small Payloads on the HASP structure; RF payload on amateur radio band; external temperature sensor for comparison with Standard Atmosphere, and finally internal temperature sensors for health monitoring and evaluation of insulation. (Hawk Institute for Space Sciences / UMES)

Found in Space A low-cost star, sun and moon tracker, which also looks down at the Earth. This will be a test of the system which is part of a effort to win the Google Lunar XPrize. (Tulane University)

High Energy Monitor Instrument (HEMI) to detect when a gamma ray burst (GRB) occurs and record data on the event. Ultimately, HEMI is intended to be a student instrument for measuring GRBs on a future satellite. (Pennsylvania State University)

University of Maryland Advanced Balloon Communications Experiment (UMD/ABC) a next generation system that provides a total downlink of 9.6-128 kbps. This system has been flown numerous times with great success.

Distant Aerial Cosmic Radiation Acquisition Package - an experiment to measure the intensity of cosmic radiation with respect to altitude and time, and classify different types of radiation according to their energies (West Virginia University)

Passive High Altitude Particle Capture Experiment to collect particles, especially those of extraterrestrial origin, from the stratosphere and return them to earth for analysis. Particle collected will be later compared with samples from the NASA Cosmic Dust Laboratory. (Montana State University)

DIE HARD (Demonstrating Intensity of Electromagnetic High Altitude Radiation Determination) - An experiment to determine the viability of high altitude observatories by diurnal imaging of celestial bodies, measuring and recording light intensity in the stratosphere as a function of altitude, and by nocturnal imaging of celestial bodies to determine atmospheric turbulence and light intensity due to residuals in the atmosphere. (University of Colorado at Boulder)

MRE II - Microwave Reception Experiment - a project that focuses on characterizing the microwave background at stratospheric altitude in the frequency band between 45 and 75GHz including to understand possible interferences in higher frequency bands and . A secondary goal of this experiment is the testing for a possible future cryogenic HASP mission designed specifically to detect the Cosmological Microwave Background (CMB). MRE II will use the latest passive microwave reception technology on the smallest scale ever attempted to capture and analyze these waves.

Magnetic Field Investigation of Luna (MIL) - An experiment to determine if photogrammetry is a feasible low cost alternative to other topographical mapping methods for the lunar surface. This will be accomplished by flying five cameras in an enclosed ''camera pack" at the end of a fixed mechanical boom. The system will map the topography of the Earth in the same manner as a lunar spacecraft in orbit (Virginia Tech)