The PRORA-USV program was conceived in 2000 and started two years later under managment of the Italian Aerospace Research Center (CIRA) to design and manufacture two identical unmanned Flying Test Beds (FTB) named "FTB-1 Castore" and "FTB-2 Polluce" conceived as multi-mission flying laboratories. These vehicles are key pieces to test and verify advanced functionalities and critical operational aspects of a future Reusable Launch Vehicle (RLV) intended for orbital space missions. To reach the project's goal CIRA built not only the two FTB's but also developed several methodologies and tools in the field of meteorological forecast and prediction and optimization of balloon trajectories.

The gondola used to hang the FTB is called "StratoLift" and was developed specially for this mission by the Italian Space Agency. It hold not only the model to be dropped but the telemetry and communications equipment and CIRA's avionics as well all the electrical and mechanical equipment devoted to control and monitor the FTB during the initial climb under the balloon to float altitude. Also are located in the gondola several balloon subsistems like the control of the valves located in the apex of the balloon for venting gas and the ballast container.

The gondola is connected to the bottom of the balloon throught a parachute, whose purpose is double: to insure a safe termination of the mission in the case of any emergency and the safe descent of the gondola once separation from the vehicle has been accomplished. As the mission is planned to be performed on the open sea, the gondola is equiped with self inflatable floats to prevent the sunk of the structure.

The FTB demonstrator plane is a slender, non-propelled, winged vehicle measuring 9 meters long and with a total weight nearing 1.3 ton. It is able to perform experiments on structure and materials, autonomous guidance navigation and control (GN&C) and thermo-aerodynamics in two flight configurations one in sub-transonic regime and one in supersonic regime. Inside the aerodynamically shaped hull there are located all the subsystems necessary to control the craft: hydraulic manouvering system to control the attitude of the craft wjile dropping, a three stage parachute to brake the FTB before splashdown in the sea as well other systems like thermal control, electrical power, data handling and telemetry, tracking & command. The FTB can accommodate onboard a scientific payload denominated as Passenger EXperiment or PEX. The tail is formed by four vertical fins to reduce interference with wings, with parachute at deployment, and structural constraints, as well as to match stability and control requirements.

The FTB main structure was constructed by Carlo Gavazzi Space SPA and several subcontractors while the flight mechanics hydraulic system was responsability of Alcatel Alenia Space. The onboard avionics and control software were developed by Techno Systems and Space Software Italia respectivelly.

The vehicle is mechanically linked to the gondola and is separated at the moment of the ejection by means of a pyrotechnique device. 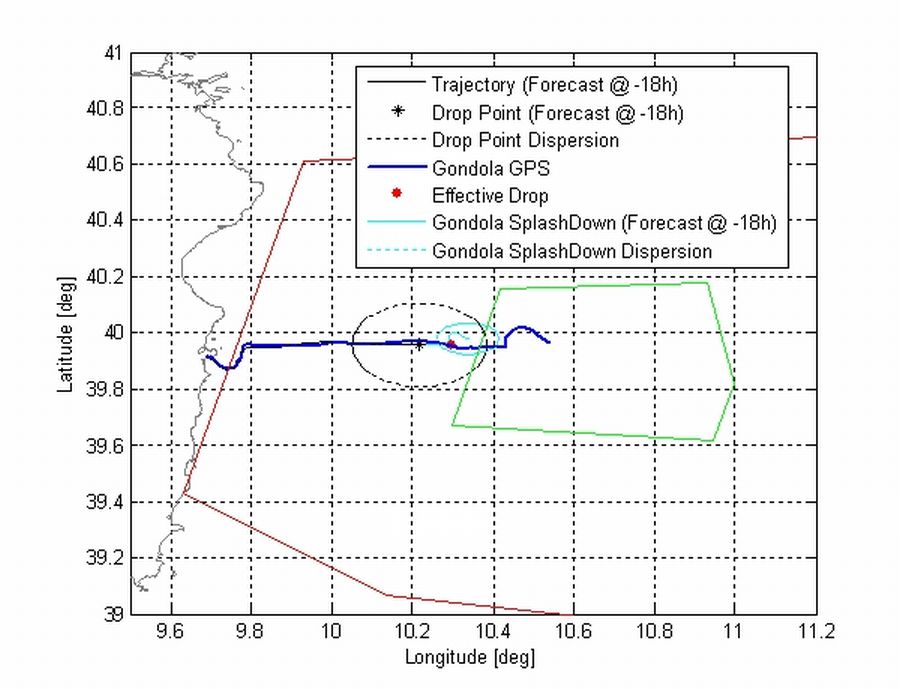 The pre-launch phase started about 20:00 local time on 23 February. After the flight segments were integrated, a full checking of the FTB1 vehicle and carrier as well as housekeeping data was performed. Once completed the preparations started the launch phase about 6 hours before the balloon release. All the operations were performed in the launch pad and were focused on the last controls of the flight segment functionalities and on the deployment and inflation of the balloon.

The balloon was launched by semy-dinamic method on 24 February 2007 at 8:30 a.m., and after a nominal ascent phase with eastward displacement that lasted 98 minutes, the vehicle and his payload reached float altitude of 20.2km. Several minutes later at 10:08 am the FTB was released when the balloon was located at Latitude 39.95108 and Longitude 10.29903, within a huge isolated area restricted to aerial and maritime traffic controlled by Italian air force test range in Salto di Quirra (PISQ). The mission ended at 10:30 a.m. with the splash-down of the space vehicle at coordinates 39.94 Long.10.37 and the termination of the balloon and the separation of the gondola. Then started the last phase of the mission under charge of the ship "Tavolara" of the Italian Navy to recover from the sea the gondola, the balloon and the vehicle. The recovery operations ended at 22.30 p.m. lasting near 12 hours.

This was the first nominal atmospheric mission profile of the project. It was named dropped transonic flight test or DTFT and was intended to drop the FTB1 vehicle from a stratospheric balloon at an altitude between 19 km and 21 km, to test the aerodynamics and flight behaviour in transonic flight regime, in a condition similar to that experienced by a winged launcher stage during its atmospheric reentry trajectory. The vehicle accommodated onboard a scientific payload (called a Passenger EXperiment, PEX) which was aimed at conducting two main experiments: an aerodynamic test coupled with a structural test for validating the overall aerodynamic and structural design and analysis tools and a GN&C technology test aimed at validating the stability and control augmentation system and related analysis and design tools in the reentry flight phase of Terminal Area Energy Management (TAEM), which ranges from Mach 2.0 to 0.5. Furthermore, the DTFT mission allowed to gather significant information regarding the separation from the balloon and the starting phase of the FTB_1 descent; and the capability to cope with the mission final phase, from parachute opening to recovery.

The flight itself was very good, with a nose-up manoeuvre under transonic conditions, reaching a maximum Mach as high as 1.07. However, the final phase of the flight wasn't correctly accomplished. After 37 seconds of flight the on board parachute was activated to slow down the vehicle, but the first of three stages didn't deployed work properly causing the FTB1 to impact the water surface harder than expected. When the recovery ship reached the impact zone found that the plane was broken.

After careful examination of the flight data, the scientific team realized that things went wrong just after the plane dropped below 10 km in altitude when due to the deployment failure of the parachute it accelerated to Mach 1.2 beginning an uncontrolled spinning. The fast spinning of the craft slowed somehow the final velocity but it still hit the sea with such force that it split into three pieces, one of which sank.

Nevertheless, the mission target was completely achieved as some 2 million measures were taken of flight data, housekeeping information and the readings from 500 aerodynamic and structural sensors located in different parts of the vehicle's body. The only point not tested at all was the recuperability and reusability of the platform.

Future tests will be carried out using the FTB-2 "Polluce".