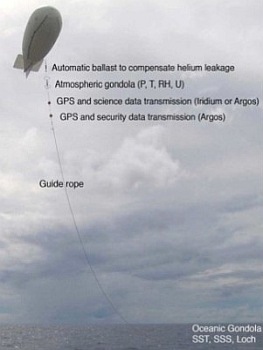 The Aeroclipper device is a balloon vertically stabilized by a guide rope aimed to perform flights of up to 30 days in the surface layer (under 50 m) over remote ocean regions. The system was a cooperative design between CNRS and CNES. The image at left shows the second generation of the balloon introduced in 2007 to replace the tetrahedral balloon used in the initial design. The adavantage of this new balloon (built by Raven Ind. from US) is that can be easily controlled during the deployment phase and because it is designed to remain stable under the effect of a relative wind on its structure and is more robust. Finally, its most important feature is to have an aerodynamic vertical lift, that is, that like an airplane wing, a horizontal relative wind causes a vertical force on the balloon. This aerodynamic lift prevents strong inclination of the system and allows lifting the guide chain (reduced hydrodynamic drag) in strong winds.

In the guide rope is attached an atmospheric gondola that contains instruments for measuring meteorological parameters (pressure, temperature, relative humidity, relative wind speed) and an oceanic gondola contains instruments for sea surface temperature, salinity and the speed with respect to water. A GPS position of the Aeroclipper is collected every minute and atmospheric measurements are performed every 10 seconds and averaged over 1 minute.

The data obtained along with the position is relayed to the ground control station using the Argos and Iridium communication platforms.

This aeroclipper in particular along with Aeroclipper Nº 2 converged into Tropical Cyclone Dora during its developing stage and remained within the eye of the cyclone the following days. They stayed near the center of the eye for most of the active phase. Unfortunately, no atmospheric data were transmitted during this episode because both Aeroclippers onboard software had been accidentally switched to a wrong measurement mode a few days before.