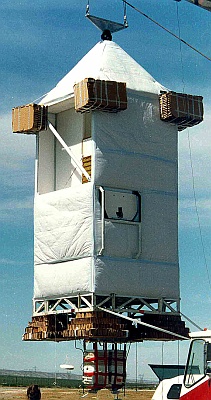 JPL Remote is a multi-instrumented upper atmosphere research experiment sponsored by NASA and run by the Jet Propulsion Laboratory, in Pasadena, California. This program started in late 70's as part of an initiative to measure the abundance and altitude distribution of key chemical constituents in the upper atmosphere. Two modular gondola systems are available to carry multi-instrument packages consisting of several JPL remote sensing instruments and instruments from other institutions in the U.S. or abroad, configured for a particular scientific purpose. Data obtained on the altitude profiles for a number of chemically coupled species from one or simultaneous flights is used for instrument intercomparison purposes and for the validation of atmospheric chemical models.

The instruments are mounted in two specially built gondolas measuring 6 ft. by 6 ft. on their sides by 18 ft height and another half the height. At left we can see an image of one of them. To perform the measurements of atmospheric trace species is used the technique of solar occultation, in which the direct Sun is viewed through the atmospheric limb thus providing long atmospheric paths and hence high sensitivity to trace species. The type and number of the instruments may vary from flight to flight but range from photometers and radiometers to spectrometers and interferometers.

The gondola counts with a sun tracker that drives a rotator performing the pointing of the gondola in azimuth. Onboard are also included the standard NASA telemetry / telecommand system and batteries to power all the instruments. As the gondola is not pressurized, to protect the instruments from cold of the stratosphere it is covered in all sides and top with a canvas made of insulating material. Crush pads made of hobeycomb cardboard are fixed beneath the four bottom corners and around the upper corners of the gondola to minimize the shock of landing or damage from tumbling on its side. Below the platform is mounted a ballast hopper containing steel shot that is released on command to compensate loss of altitude of the balloon in flight.