This instrument is a balloon-borne telescope of a new kind for making gamma-ray observations in the MeV energy range. It uses multi-layers of thin silicon detectors to track and measure the energy losses of Compton recoil electrons. When combined with the direction and energy of the Compton scattered gamma ray a unique incident direction for each photon event is determined. This facilitates background rejection, improved sensitivity, and image reconstruction.

At left we can see an scheme of his configuration (click to enlarge).

Basically is composed by two major elements. The first, called D1, consists of 50 or more layers of double sided silicon strip detectors (SSDs). These detect charged particles passing through the detector, giving X and Y coordinates of the interaction location with a resolution of less 1 mm. The second component, D2, consists of 5 to 10 layers of cadmium zinc telluride (CZT) strip detectors. The CZT is arranged to form a five-sided box surrounding D1. This design feature is new for Compton telescopes, and allows TIGRE to detect large angle Compton scatter events. This capability greatly enhances the instrument's efficiency, as well as providing the ability to perform as a gamma-ray polarimeter.

Ideally, an incoming gamma ray Compton scatters in the top layer (D1), with the energy of the recoil electron being measured there. The gamma ray is then absorbed in the bottom layer (D2). The Compton scatter formula can then be used to calculate the scatter angle of the gamma ray. The locations of the interactions in D1 and D2 are found by timing and pulse height analysis, and can be used to give the direction of the scattered photon. The time of flight of the photon from D1 to D2 can also be measured to discriminate downward from upward (background) events.

Another feature of TIGRE is that it was also designed to overcome many of the common limitations of Compton telescopes. First and foremost, the use of SSDs gives the potential to track the Compton recoil electron. With the knowledge of the scattered electron's energy and direction, the possible directions of the incident gamma ray describe a small arc on the sky, rather than a complete ring, greatly reducing potential source confusion and increasing sensitivity. The electron tracking also allows kinematic rejection of various backgrounds, such as events which first interact in D2, as well as events which are not completely absorbed by the detector. This background rejection capability leads to enhanced sensitivity and resolving power. A second significant advance in the design of TIGRE is the use of the CZT strip detectors. The fine pitch (< 1 mm) of the CZT strip detectors allows high spatial resolution to be attained without a large (> 1 m) separation between D1 and D2. This not only results in a more compact instrument, but also allows to extend D2 up the sides of the detector, to form a sort of open-ended box surrounding D1. Such a configuration allows for many more coincidences between D1 and D2, improving efficiency in the Compton regime by a factor of 5 or 10 over previous Compton telescope designs. In addition, surrounding D1 in this way allows events with large scatter angles to be detected, transforming TIGRE in a highly effective gamma ray polarimeter.

TIGRE will also act as a low energy pair detector in the energy range 10-100 MeV as the SSDs will serve both as converter and tracker, while the CZT arrays will act as the calorimeter. The relatively low density of silicon allows the propagation of low energy pairs through several layers of the detector. The fact that TIGRE is at the same time both a Compton telescope and a pair detector, gives the instrument a relatively constant efficiency of about 10% over the entire energy range 0.3-100 MeV. Combining this with a wide field of view (+/- 60 degrees) and the background rejection capability afforded by electron tracking, TIGRE is well-suited for a variety of gamma-ray astronomical observations.

The energy range 0.3-100 MeV is important because it contains the critical signatures of a variety of emission processes, including electron bremsstrahlung, cosmic-ray/matter interactions, and inverse Compton processes. A proper evaluation of the gamma-ray spectral shape in this range is necessary for the study of the physical mechanisms generating the gamma rays. Further, enhanced angular resolution and sensitivity will likely lead to discovery of new types of gamma-ray sources and provide more detailed information about the nature of diffuse gamma-ray emission in our galaxy. 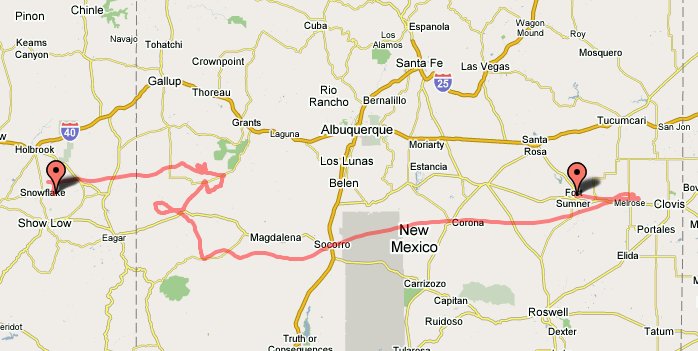 The balloon was launched by dynamic method with assistance of launch vehicle at 14:23 utc on June 2, 2007.

After a nominal ascent phase, the balloon headed due east but after reaching float altitude, started the final course due west. At right can be seen a map showing the balloon path (click to enlarge).

After a total flight time of 27 hours the mission was terminated at 16:54 utc the next day while the craft was fliying over eastern Arizona. The payload impacted 24 nautic miles SE of Holbrook, Arizona. The termination, descent, and manual/visual parachute cut away were also nominal.

The instrument landed on a dry riverbed and was neccesary an helicopter to lift it from there. The payload and balloon recovery were completed on June 5 and returned to Fort Sumner.

The scientist succesfully collected data on all of the principal targets and several secondary targets. Approximately two million events (100 GB) were recorded during a period of twenty hours.