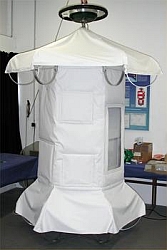 SALOMON-N2 is a UV-visible balloon-borne spectrometer designed, like its predecesor SALOMON, to provide vertical profiles of O3, NO2, NO3, OClO and OBrO as well as the extinction coefficient of aerosols, at altitudes between 15 and 40 km. SALOMON-N2 conducts observations at night using the Moon as its light source and during the daytime using sun pointing.

The instrument weighs about 170 kg. It works in automatic mode during flight (including start-up, pointing, spectre acquisition and shut-down). The pointing system, the pivot and the gondola were developed at the Laboratoire de Physique et Chimie de l'Environnement (LPCE). Salomon-N2 uses an spectrometer similar to the one used in the SAOZ instrument and an aerosol counter called STAC.

In the future is planned to allow the integration of other instruments for the observation of further atmospheric compounds. In particular will be added a UV spectrometer dedicated to the observation of bromine monoxide BrO, an infra-red spectrometer for the measurement of methane CH4 and the DUSTER aerosol collector of Naples University.

SALOMON is involved in validation programmes for the ENVISAT satellite

This was the first engineering test of SALOMON-N2. During this flight, the gondola was locked on the moon with a precision of 0.075 degrees and the fine pointing system revealed a precision of few thousandths of degree.