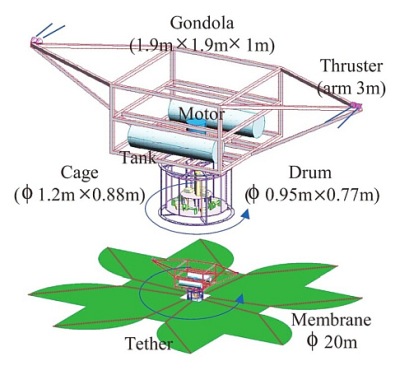 As part of the studies of the deployment of the sail in space, it was planned to carry out a test using a balloon in the stratosphere to simulate as accurately as possible the conditions of deployment with a very low drag coefficient due to the thin air. In the upper left image we can see an scheme of the gondola (click for more details including the deployment sequence).

The deployment system was fixed under the sub-gondola and was based on a drum structure. The shape of the drum was octagonal cylinder with a height of 0.64 meters. The sub-gondola had two pairs of thrusters whose arm length was 3.5 meters, which rotated the experimentation system during the mission. A pair of thrusters were counter-clockwise and the another clockwise which accelerated and decelerated the spin, respectively. To control the spin rate, two gyro sensors were mounted on the structure. Two carbon fiber reinforced plastic tanks (each one 150 liters) were located inside the sub-gondola to feed the thrusters. A camera located in one side of the sub-gondola showed the deployment sequence in real time to the ground control.

The membrane of the test sail was made of Polyethylene Terephthalate (PET) film, square-shaped with folding lines having a diagonal length of 20 meters. Four tether lines were wriggled on the membrane for controlling deployment speed. The membrane -which was initially rolled up around the drum- received centrifugal force to be deployed. Small masses were added on the four corners of the membrane to help the deployment by increasing the centrifugal force.

After the balloon reached float altitude, the experiment was powered on. First phase was to acquire a spin up to 24 revolutions per minute (rpm), after which the relative rotation motor control start and the first stage deployment was achieved. Once this phase is completed a spin rate of 15 rpm is maintained to study the dynamics of cross shaped membrane. After that, the spin is increased again up to 21 rpm and the guide bars are released starting the second deployment stage. A spin rate of 15 rpm is maintained to allow the study the dynamics of the full expanded membrane.

Once completed this phase, top and side cameras are turned off, the experiment system is powered off and the payload is separated from the balloon for a safe splashdown in the Ocean.

After a nominal ascent phase, the balloon reached the float altitude at 37 kms, flying over the sea. In that moment the deployment of the solar sail was done and after that the flight ended with the separation of the balloon at 9:48 JST, after a flight of more than 3 hours.

The payload descended in the Pacific Ocean and was recovered by helicopter.

During this flight was achieved the worldwide first quasi-static development with the world's largest membrane size ever using a balloon.

The data obtained is a invaluable reference for the use of this solar sail membrane in future spacecraft currently under development.