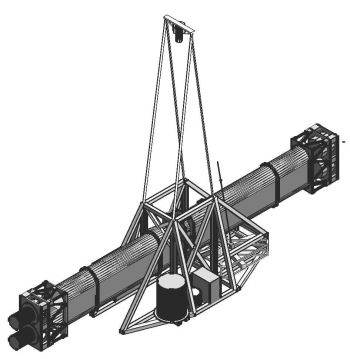 The main scientific goals of the SUMIT experiment are the detection of particle acceleration mechanisms in the universe, direct measurements of the emission of black holes hidden by thick interstellar clouds in the cores of galaxies, and the study of nucleosynthesis in supernova remnants to understand the reprocessing cycle. of chemical elements in the universe. The data and images collected by the telescope will be analyzed by the researchers.

SUMIT is one of the recent stratospheric balloon experiments developed in the world to observe energetic X-rays through focusing techniques using geometric optics (until then restricted to X-rays with energies below 10 kiloelectronvolts, or keV). The images produced by SUMIT can reach 100 keV.

Video footage of the balloon launch

The balloon was launched from the Cachoeira Paulista base on November 19th, 2006, using a semy-dynamic launch method with help of a big crane acting as fixed launch vehicle. Here is the accurately account of the balloon operations.

On the previous day, another launch was tried but the weather was not cooperative and the base was hit at noon by strong rain, wich forced to delay operations until the next day. Then on Sunday 19th, the weather conditions were also doubious but with a small window during the afternoon-evening wich may be will allow the launch. Taking account of the forecasted good wind perspective in the stratosphere the launch operations started in a race against the clock and the rain.

Thus, as previously planned the big crane, went to the hangar and picked up the telescope at 14:30 local time and take it to the launch pad where arrived at 15:10. Near 16:00 the telescope was turned on preparing for the launch and 30 minutes later the balloon was extracted from the cointaining box, laid in the ground and started the inflation. This was the point of "no return" because the balloon once inflated would be launched or destroyed, it can't be re-used.

The hidrogen filling of the balloon lasted until 19:00 hs, when under a overcated sky the go signal was issued and the balloon released. It moved downwind forward to the crane holding the payload. When the balloon was almost vertical over it, the crane arm was moved along it to smooth the pick up shock and finally the payload was released, starting the ascent and soon clearing the cloud deck wich obscured the Sao Paulo sky.

After the launch and during initial ascent phase, the ground team verified all systems were functioning well making observations of the radiation of the cosmic background. Then the telemetry link was lost due to a ground power shortage, but then returned partially.

Followed an all night long flight without major problems and then the bad news: the winds at float turned unexpectedly in a suthern course so the balloon headed to the ocean. The balloon operations team tried to modify the ill fated course by changing altitude, but could not get it back so the flight was terminated above the Atlantic Ocean, and the payload was lost. The last known coordinate of the payload was 43º 16' 2'' W and 24º4'00'' S in a sector 50 km from Restinga de Marambaia a narrow land strip in the ocean shore of the Rio de Janeiro state.

As the balloon was near the float altitude, the base of Cachoeira Paulista suffered a power outage due to a very strong thunderstorm wich hit the zone. This provoked also to lost the telemetry link for science data. Took some time to restart the ground systems and to establish normal communications with the gondola, reasuming almost normal operations. However, the science telemetry did not recover until the latest portion of the flight.

After operation had resumed, the science team started again the pointing of the telescope. At this time, the pointing telemetry was fine and they were able to confirm that SUMIT was tracking observation target, and also that instruments had been working fine during ascent. These were indications that the observation was being carried successfully, although until then the science data had not yet recovered.

During this final phase of the flight, and just before termination the science telemetry returned and althought it was not "clear and loud" the science team enganged in a frantic race against the time to download all the observational data to try to save it before the sunking of the telescope.