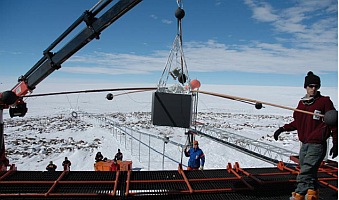 The MINIS balloon campaign was designed to observe dusk-side relativistic electron precipitation events from multiple locations to study spatial extent and variation, north-south conjugacy, and evolution as electrons drift over several hours of local time. It was carried out in January 2005 and consisted of four payloads launched from SANAE station in Antarctica (a.k.a. MINIS south), and two payloads launched from Ft. Churchill, Canada (a.k.a. MINIS north). Both campaigns were carried out in a coordinated manner and carrying almost the same instruments.

At left we can see an image of one of the payloads. The principal science instrument aboard was a 3 inches diameter by 3 inches height cylinder of Sodium Iodide (Tl) used to measure bremsstrahlung X-rays produced by precipitating relativistic electrons in the tenuous atmosphere above the payload. When an X-ray interacted with the NaI crystal, a pulse of light whose brightness was proportional to the energy deposited by the X-ray was produced. The scintillator was optically coupled to a photocathode sensitive to the characteristic wavelength of light produced by the crystal (~540 nm in this case). The photocathode emited a number of electrons proportional to the light pulse. These were then accelerated through a series of dynodes in a photomultiplier tube (PMT). The end result of which was a current pulse proportional to the incident photon energy.

The spectrometer covered the energy range from 20 keV to 10 MeV. PMT pulses were shaped by an associated analog electronics board, then digitized using 12 bits of energy resolution spread linearly across the energy range. The instrument board then issued an interrupt to the flight computer which recorded the time of this interrupt at 20 Hz (50 ms) resolution. Counts were then recorded in the data stream in two separate manners. Every 8 seconds a summed spectrum from 20 keV to 10 MeV was recorded in 208 channels which were sized pseudo-logarithmically across the energy range. At a significantly higher cadence (20 Hz) the instrument also recorded 4 broad energy channels from approximately 20-175 keV, 175-540 keV, 540-825 keV, and 825 keV to 1.5 MeV.

MINIS included also an electric field instrument that employed three double Langmuir probes to measure the vector electric field at the payload. The spheres were 15 cm in diameter and separated from the payload center by 2.0 m (horizontal) for a 4.0 m total separation. The vertical pair of spheres was rigidly separated by a 1.0 m boom which was threaded over the payload loadline (the rope connecting the balloon and the payload). The entire payload was rotated by a motor in line with the load line at a rate of ~2 rpm average.

All the system were controlled by a PC104 single board flight computer with a custom interface board developed at U.C. Berkeley. It's main function was to acquire measurements from the instruments, add timing, housekeeping and position data, and finally transmit the data to the Iridium satellite modem at an average rate of 256 bytes/s. The modem provided the real time data link between the payload and the ground station during all stages of the flight at 19.2K baud. Commands could also be sent through the Iridium link in order to terminate the balloon flight.

The instrument was powered by large lithium chemistry primary (non-rechargeable) cell batteries to power a series of DC-DC converters that in turn powered the payload's components.