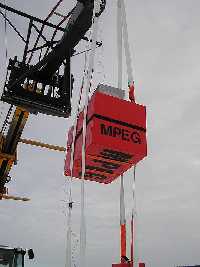 This was the third flight of the project and involved the participation of students at Kiruna Space and Environment Campus togheter with pupils from Hjalmar Lundboms school and the space high school, Rymdgymnasiet. At left can be seen the gondola where the experiments are stored (click to enlarge).

After a flight of near 5 hours due to east, the cut down command was given at 19:40 UTC and the landing took place 43 km west of the village of Vilhelmina.

MPEG - Multi Purpose Experiment Gondola is a complete platform for small stratospheric balloon payloads. The whole project is a union of three different projects, describing the three main subsystems of the balloon platform

Also on this flight were included experiences from the Upper secondary school of space ranging from to see how bass and gitar strings react to the extreme environment to probe Einstein's relativistic theories by sending a clock and comparing any time difference and from the school of Hjalmar Lundbom with two experiences one to examine what kind of leave beast can stand extrem freezedry and the other to study the seeds ability to grow after freezdry.

Test of the E-Link system with maximum data load versus achieved flight range. One new ARGOS-GPS unit for positioning and localisation was also tested.