Developed by Departament of Astronomy and Astrophysics, Tata Institute of Fundamental Research (TIFR) 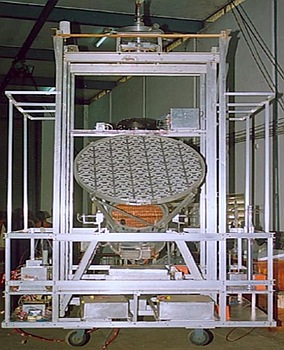 HEXIT is the acronym for High Energy X-ray Imaging Telescope an instrument that combined a large area phoswich anger camera with a coded aperture URA mask. It was developed by the Department of Astronomy and Astrophysics of the Tata Institute of Fundamental Research to perform hard X-ray observations in the energy region between 20 to 800 keV.

In the image at left we can see the telescope mounted in the stabilized gondola (click to enlarge).

HEXIT used a new type of detector: a large area phoswich assembly having 40 cm dia and made of NaI(Tl) and CsI(Na) scintillator crystals. Since the optimum thickness of the two scintillators in a phoswich detector depends on the targeted energy range, HEXIT assembly consisted of 12 mm NaI(Tl) as the prime detector coupled to a 40 mm thick CsI(Na) crystal. The combination was vacuum sealed with a 0.127 mm aluminum entrance window and a 10 mm thick PyreX back plate. Thirteen 76 mm phototubes were directly coupled to the optical window in a quadrant symmetric fashion. To obtain the location of the photon interaction over the surface, all signals from 13 phototubes were individually pulse height analyzed and digitized. Data was transmitted to ground along with pulse height information and time-tag for each photon.

A wide angle monitor (WAM) was designed as a light weight add-on instrument on a conventional balloon-borne payload with narrow field of view, to provide a wide angle coverage for transient events during the flight. However, the monitor could be used as a stand-alone all sky monitor both for the detection of transient events in hard X-rays and for long term monitoring of known X-ray sources. The monitor assembly consisted of 8 CsI(Tl) detectors with 45 cm2 area arranged on a geodesic frame. Such a geometry provided a large coverage of the sky. The detectors were viewed by miniature 2" Hamamatsu photomultipliers. The field of view of each detector was restricted to ~55" FWHM by using a honeycomb lead collimator. The collimators were designed to give an overlapping view of the same object in at-least two detectors, both in the elevation and azimuthal axis.

Both detectors (WAM and HEXIT) were mounted on a frame, which was stabilized in azimuth using a servo-controlled reaction wheel drove by a magnetometer. The phoswich anger camera was mounted on bearings and could be rotated in zenith using a DC motor and a 12 bit optical shaft encoder in servo loop. The true north axis of the frame was calibrated on ground using the pole star. The payload gondola was fully automatic and was controlled by an on-board microprocessor-based star tracker for payload orientation and source tracking. A GPS system was incorporated to provide instantaneous value of the balloon coordinates (lat, long) for the computation of the look angles. Although the instrument works automatically, all parameters of the instrument could also be commanded from ground if required, using manual-mode override.

The HEXIT payload was launched from the National Balloon Facility in Hyderabad, on March 25th, 2005 at 3:05 IST. The 650 kg. payload carrying an additional ballast of 200 kg. reached a ceiling altitude of 3.8 mbars. A total of six hours of data was obtained at float altitude before termination of the flight by command. Being the first flight for the instrument, a large majority of the observations were devoted to the study of various engineering, control, stabilization, electronic and the event-selection parameters along with two source targets.