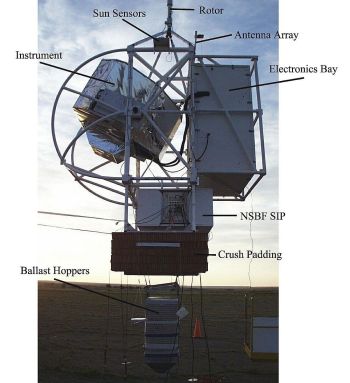 Is a balloon-borne soft gamma-ray (0.2-15 MeV) telescope designed to study astrophysical sources of nuclear line emission and gamma-ray polarization. It is part of the program to develop and test technologies and analysis techniques crucial for the Advanced Compton Telescope to be launched in 2015. At left we can see a image of the gondola ready for flight and indications of the distribution of every component (click to enlarge)

The launch (by dynamic method using launch vehicle) was complished at 17:05 utc on June 1st.

After a nominal ascent phase with the balloon heading east, a float altitude of 130.500 ft was attained and the balloon started a slow drift due west (click in the map at left to see the balloon flight path).

The gondola frame suffered some minor and mostly cosmetic damage during impact, but is otherwise fine. The NSBF parachute termination package worked flawlessly, releasing the parachute from the gondola right after landing. Since the flight, the entire detector and data system has been powered up in the laboratory and is working fine. Neither the detectors, cryostat, nor electronics suffered any damage during the flight, landing, or recovery.

For this first engineering flight was used a reduced configuration with only two, 3D imaging germanium detectors (GeDs) and without solar panels. The mission had two main technological goals:

During the flight the instrument and associated electronics performed flawlessly, and were achieved both of these goals.

In the scientific side, the main objective was the observation of the Crab Nebula/Pulsar and the transient accreting pulsar 1A0535+262. Both pulsars are spatially close on the sky and therefore simultaneously fell with within the NCT field of view. The Crab was chosen because it is a well studied source, and an excellent one to calibrate on. The pulsar 1A0535+262 is transient, but the scientists were fortunate enough that it was in a rare outburst state during the flight. In addition to being able to image two bright point sources, 1A0535+262 provided the opportunity to search for hard X-ray cyclotron absorption features with unprecedented spectral resolution.

As discussed in detail above, the gondola pointing system was set up to keep the instrument at a fixed elevation, but to actively point in azimuth to keep the Crab centered in the field of view. Unfortunately, shortly after launch the azimuthal pointing system failed, seriously compromising the exposure to the sources and adding an extra level of complexity to the data analysis.