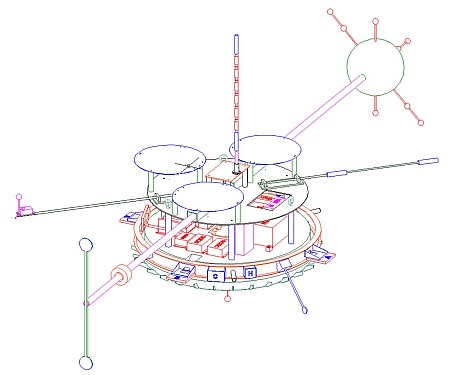 PEASMA mission which stands for Perturbations Electro-Aérodynamiques et Sonde MArtienne was the last balloon-borne mission in support of the Cassini/Huygens scientific effort. It used a mockup of the Huygens probe built by the Laboratoire de Physique et Chimie de l'Environnement (LPCE) in Orléans, France. The platform -which can be seen at left- was a structure 5 meters x 2.2 meters x 1.3 meters with a total mass of 158 kg. Main scientific objective of the mission was to study the electrical charging of a conductive body in vertical motion in the atmosphere and specially the problem of the charge collected by a large body moving in the electrically quiet atmosphere. For that purpose several electrodes around a conducting sphere and around the Huygens probe mockup were connected to high impedance voltimeters to study the potential environment of these objects.

A second objective was to test a prototype built by the Centre d'Etude des Environnements Terrestre et Planétaires (CETP) from France which was to be installed on the ARES experiment NetLanders to investigate the atmospheric conductivity and the electric fields on the surface of Mars. The balloon flight served to test the instrument at about the same pressure than on the surface of Mars and with measurable ionic conductivities and electric fields. Aditionally, a segmented Langmuir probe built by the Space Science Department of the European Space Research and Technology Centre (SSD-ESTEC) was also added to these instruments.

Finally, two radar altimeters -similar to the ones carried in the Huygens probe- used to determine the probe altitude during Titan's entry were also installed. Objective was to test the digital data acquisition (DAQ) system of both units, the backup DAQ system and camera; to verify correct concurrent operations of both radars, to check the performance at high altitude and to collect data for supporting Huygens radar data analysis.