LABS is a backscatter diode laser developed by the Istituto di Scienze dell'Atmosfera e del Clima (CNR-ISAC) and Ente Nazionale per le Nuove tecnologie, l'Energia e l'Ambiente (ENEA). It provides an in-situ measurement of the aerosol volume backscatter coefficient and aerosol depolarization at 532 nm. The aerosol volume backscatter coefficient detects the presence of aerosols in the air mass sampled, as well as a rough estimation of their quantity. The aerosol depolarization, being the ratio to what extent the main polarization of the laser is preserved in the backscattering process, gives information on the shape of the particles, and in some cases a coarse estimation of their dimensions as well.

The AIRS electric field instrument developed by the Centre d'Etude des Environnements Terrestre et Planetaires was designed to measure the vertical component of the atmospheric electric field from DC to 10 kHz and the electric conductivity of the atmosphere through the relaxation technique. It uses the double probe technique with 2 carbon coated cylindrical electrodes, 3 cm in diameter and 15 cm long, installed at the ends of a vertical boom, 1 meter in length, located 25 cm away from the gondola. Grounded plates, also coated with carbon, are installed on the sides of the gondola. Data are recorded in 2 channels, one for large amplitude DC signals, and the second one for low amplitude AC signals.

The lightweight Tunable Diode Laser (TDLAS) developed by the National Physical Laboratory (NPL) uses near-infrared tunable diode lasers and an astigmatic Herriott cell to measure spectroscopic absorption over a pathlength of up to 101 m. The instrument is used for fast response measurements of atmospheric tracers on board balloons and aircrafts. The instrument
was configured for water vapour measurements during HIBISCUS, using an all-metal gondola designed to minimise out-gassing. The measurements were made at a frequency of 0.7 Hz over three water vapour absorption lines. 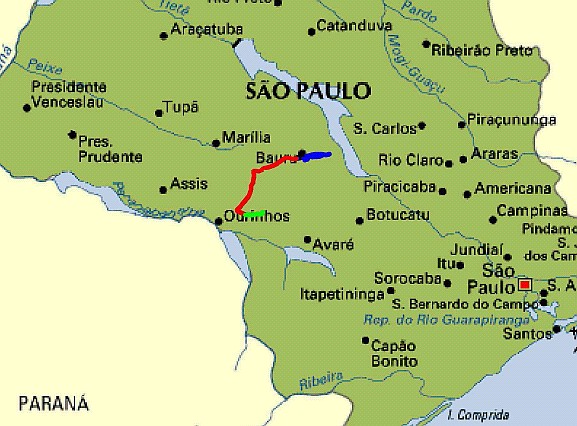 The SF1 mission was the second slow descent flight that was performed during the HIBISCUS campaign. The balloon was launched from Bauru, Brazil (22.36 S, 49.02 W) at 20:24 UT (17:24 local time) on 16th February 2004. The balloon reached an altitude of 20.5 km at sunset followed by a 6 hour very slow night time descent in a SW direction down to 15.8 km where it was cut down close to the border with Parana. In the map above we can see the development of the flight: in blue the ascent phase, in red the slow descent phase and in green from termination to landing.

The payload landed about 50 km west of Ourinhos, approximately 70 km from Bauru after a total flight time of 7 hours 21 minutes.