µLIDAR also known as MULID which is the first lightweight balloon-borne microlidar ever built. It was developed by CNR-ENEA to measure the depolarized signal backscattered by cloud particles. It's light source is a solid state laser of 1.5 µJoules of power that operates at a repetition rate of 1 kHz and at a wavelength of 532 nm. The receiver is composed by a Newtonian modified reflector telescope and the detectors are two photo-multipliers modules used to collect the backscattered light and to divide it according to its wavelength. The whole system (weighting 4 kg) is enclosed in an insulating polyurethane shield to reduce heat exchange with external environment and externally covered by a reflecting Mylar microfilm. The gondola final weight including batteries and balloon control systems is of 10 kg.

The µSDLA (Micro Spectrometric Diode Laser) developed by CNRS-SA is a diode laser spectrometer devoted to the in-situ measurement of H2O and CH4 in the UTLS (upper troposphere low stratosphere) by infrared absorption spectroscopy. Three near-infrared telecommunication-type InGaAs laser diodes are connected by means of optical fibers to an open multipath optical cell providing an absorption path-length of 28 m. The laser beam is absorbed by ambient gas molecules as it is bouncing back and forth between the cell mirrors. CH4 is monitored at 1.65 µm and H2O at 1.39 µm using the differential detection technique. The payload also includes pressure and temperature sensors. To avoid contamination by out-gassing from the balloon or the payload, only data recorded during the slow night-time descent of the balloons are considered, continued by those during parachute descent in the lower troposphere. 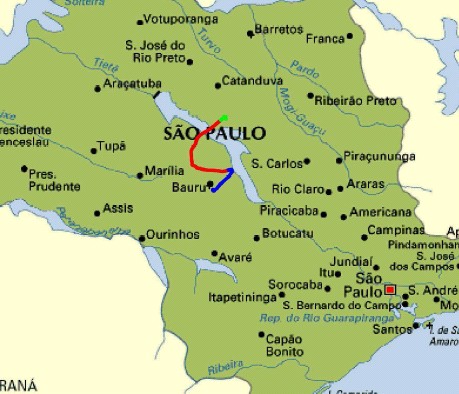 The SF2 mission was the first slow descent flight that was performed during the HIBISCUS campaign. The SF2 balloon was launched from Bauru, Brazil (22.36 S, 49.02 W) at 20:18 UT (18:18 local time) on 13th February 2004. The balloon reached an altitude of 20 km at sunset followed by a 3 hour slow night time descent (initially due east then veering to north east) down to 11.8 km where it was cut down about 40 km south of Catanduva. In the map above we can see the development of the flight: in blue the ascent phase, in red the slow descent phase and in green from termination to landing.

The payload landed about 90 km north of Bauru after a total flight time of 4 hours 39 minutes. As the flight train was partly tangled at the top of a 30 m height eucalyptus tree, it required the intervention of firemen and people climbing on the tree to recover it.