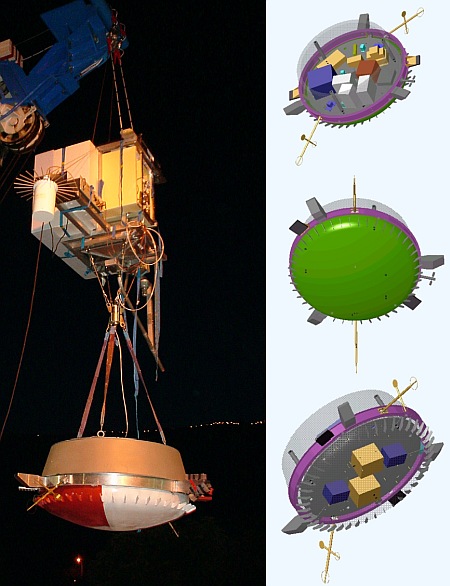 The objective of this last flight of a series of three, was to perform a drop test from a balloon over Sicily, Italy. For this purpose scientists from the University of Padova, designed and built a specially engineered probe, similar to the one launched to Titan suitable for a balloon launch and capable of collecting all HASI scientific measurements during the parachute drop in the Earth atmosphere. The main goal was to check HASI operations at instrument level and to verify sensors performance during a realistic functional test in dynamic and environmental conditions similar to those foreseen for the Titan's descent. The test would also provide real data for the exercise descent trajectory reconstruction software and to investigate possible aerodynamic disturbances on pressure and temperature measurements induced by the Huygens probe configuration. Furthermore, data from balloon flight campaigns had a secondary scientific aspect, since they provided a local detail description of physical properties of the Earth's atmosphere: density, pressure and temperature vertical profiles along with magnetic field data.

The main part of the scientific payload of the 2003 HASI balloon experiment was similar to the ones included in the 2002 flight: the accelerometer subsystem (ACC), the temperature subsystem (TEM) and the HASI pressure probe instrument subsystem (PPI). The Mars temperature sensors (MTEM), the Beagle 2 UV sensor and the tilt sensor of the Huygens Surface Science Package (SSP) completed the scientific payload; these sensors were added to the HASI units with the aim to test their performances in a flight environment and to provide support data in the analysis of the balloon flight. Housekeeping sensors (temperature, pressure, magnetometer and sun sensor) were included to check the environmental conditions inside the probe mock-up, and to provide redundancy and reference of the measurements done by the HASI and the other sensors.

Additional instruments in this third flight were the PWA (Permittivity, Waves and Altimetry) and RAD (Radar) packages. An inertial platform was also included as a housekeeping instrument, which provided a more complete set of data to improve the understanding of the probe-telemetry-parachute system motion, particularly during the descending phase of the flight.

The balloon was launched by dynamic method at 6:54 utc on June 7th, 2003 from the balloon launch base of Trapani in Sicily. After a nominal ascent phase the balloon reached an altitude of 33.03 km at 9:00 utc, from where the drop test was performed four minutes later. The payload touched ground in southern Sicily at 10:09 utc.