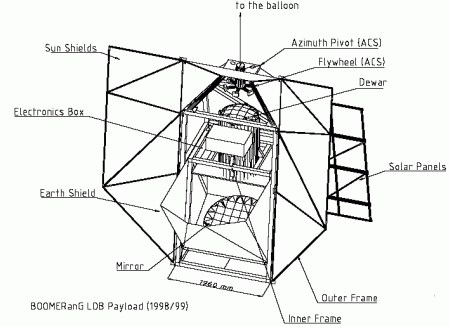 The balloon was launched from Williams Field by dynamic method assisted by launch vehicle in the morning on January 6th, 2003.

Just before launch, the ground winds picked up and caused the balloon to toss around quite a bit when it was released but no damage to the balloon or gondola was detected.

After a initial ascent nominal phase, the balloon achieved float altitude near 130.000 feet and started an anti-clockwise route around the south pole (click on the image at left to see a map with the flight path). On January 11th the balloon experienced a drop of altitude, by unknown reasons (it could be that we are caught in some unusually cold air, or perhaps developed a small leak) so all the remaining ballast was released, achieving soon float altitude again but soon strated to slowly drop again.

Decision was made to terminate the flight on January 17th, sending a LC-130 aircraft but a sudden Search and Rescue Mission to retrieve the personnel of a downed helicopter that halted the base's activities prevented to do so. Then several cancellations and a storm prevented the termination flight so was decided to send the cout-down command by satellite to prevent that the balloon drift to remote areas of the Antarctic Plateau.

The termination was achieved in the evening on January 21th, and on the next day the payload was located. On January 27h a rescue team landed near the payload and recovered the presurissed vessel containing the scientific data.

This long duration flight was the second to be acomplished in the Antarctic, very useful scientific data was obtained.