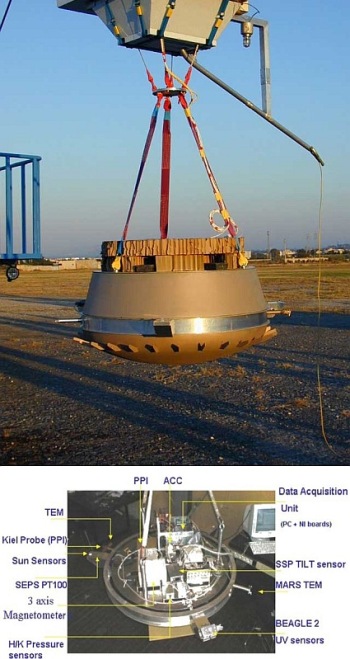 The objective of this second flight of a series of three, was to perform a drop test from a balloon over Sicily, Italy. For this purpose scientists from the University of Padova, designed and built a specially engineered probe, similar to the one launched to Titan suitable for a balloon launch and capable of collecting all HASI scientific measurements during the parachute drop in the Earth atmosphere. The main goal was to check HASI operations at instrument level and to verify sensors performance during a realistic functional test in dynamic and environmental conditions similar to those foreseen for the Titan's descent. The test would also provide real data for the exercise descent trajectory reconstruction software and to investigate possible aerodynamic disturbances on pressure and temperature measurements induced by the Huygens probe configuration. Furthermore, data from balloon flight campaigns had a secondary scientific aspect, since they provided a local detail description of physical properties of the Earth's atmosphere: density, pressure and temperature vertical profiles along with magnetic field data.

The main part of the scientific payload of the 2002 HASI balloon experiment consisted in threes spare units of HASI: the accelerometer subsystem (ACC), the temperature subsystem (TEM) and the HASI pressure probe instrument subsystem (PPI). The Mars temperature sensors (MTEM), the Beagle 2 UV sensor and the tilt sensor of the Huygens Surface Science Package (SSP) completed the scientific payload; these sensors were added to the HASI units with the aim to test their performances in a flight environment and to provide support data in the analysis of the balloon flight. Housekeeping sensors (temperature, pressure, magnetometer and sun sensor) were included to check the environmental conditions inside the probe mock-up, and to provide redundancy and reference of the measurements done by the HASI and the other sensors.

The balloon was launched by dynamic method at 6:56 utc on May 30th, 2002 from the balloon launch base of Trapani in Sicily. After a nominal ascent phase of 120 minutes (marked in red in the map above) the balloon reached an altitude of 32 km and floated there during 90 minutes (green). The separation of the probe occured at 10:10 utc initiating the descent phase of 61 minutes (blue). The payload touched ground in southern Sicily at 11:11 utc.

During the whole flight, the behavior of the instruments was nominal. Ninety-seven percent of the data was recovered by telemetry. The presence of a hill between the telemetry transmitting and receiving antennas caused a loss of the signal during the last 187 seconds of the descent, but 100% of data was recovered from the on-board storage.