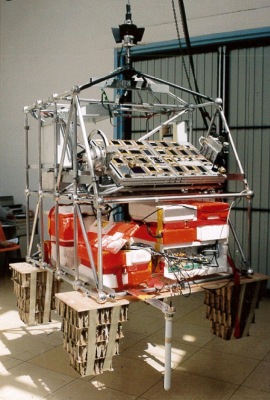 In late 1970's decade the french space agency CNES started a program for solar cell calibrations under the generic denomination of CASOLBA (CAlibration de cellules SOLaires sur vol BAllon). In the image at left we can see a detail of the platform configuration used since the inception of the program between 1998 and 2001 (click to enlarge).

The standard flight used a 100.000 m3 balloon which assured an altitude of flight between 34 km and 40 km. The structure of the gondola was formed by aluminum alloy tubes assembled together by hemispheres. It counted with pointing capability to direct the cells to face the sun. A special baseplate housed the solar cells which also were covered with a sunshield that acted as collimator to avoid the parasitic light coming from the earth limbo and from the sun reflexion on the balloon envelope. A passive thermal control system cooled the cells during the ascent to ensure that they were at a reasonable temperature at the time of starting the measurements. In the lower part of the gondola were housed the onboard electronics and batteries and cardboard crush pads to soften the impact of the landing. The size of the gondola was slighty bigger than the used until 1996 to carry more TTC (tracking, telemetry and control) and
localisation equipment. Total weight was 185 kg.

The measuring electronics were improved in late 1990's. The temperature was recorded continuously during the entire flight allowing the calibration of 30 cells by performing measurements of the I-V characteristics from short circuit to open circuit at each temperature.

In this flight some cells were degraded by the drop of the tiny lead balls used as ballast, so it was decided to repeat the flight that same year in October