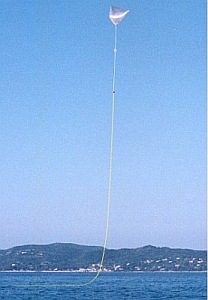 The Aeroclipper device is a balloon vertically stabilized by a guide rope aimed to perform flights of up to 30 days in the surface layer (under 50 m) over remote ocean regions. The system is a cooperative design between CNRS and CNES.

The image at left shows the first generation of the system used since the inception of the program until 2006. The tetrahedral balloon measuring 6 to 7 meters on its edge was chosen because it had a stronger drag coefficient (better wind resistance and therefore a better "Lagrangian" trajectory) compared with an equal volume spherical balloon.

In addition, these tetrahedral balloons were inexpensive and much easier to build.

In the guide rope was attached an atmospheric gondola that contains instruments for measuring meteorological parameters (pressure, temperature, relative humidity, relative wind speed) and in the water surface, an oceanic gondola contains instruments for measurements of the sea surface temperature, salinity and the speed with respect to water. A GPS position of the Aeroclipper is collected every minute and atmospheric measurements are performed every 10 seconds and averaged over 1 minute.

The data obtained along with the position was relayed to the ground control station mainly using the Argos satellital communication platform. On later flights also was included an Iridium communication device.

This flight was part of the qualification campaign carried out in the coastal zone of Madeira Island. The experience helped to test the concept of the balloon guide chain for both air and ocean segments of the vehicle, and also to test the electronic processing and the data transmission using the Argos system. During these flights, aeroclippers sustained winds greater than 10 meters/second and experienced a great amount of turbulence.