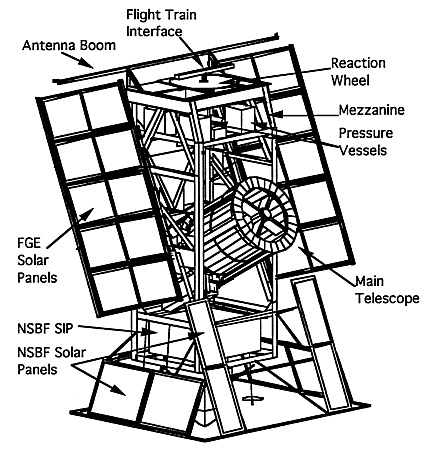 This was the second antarctic flight of the instrument and on it were obtained near 50.000 images of the sun.

After a long delay to allow the formation of a stable polar vortex of stratospheric winds the balloon was successfully launched by dynamic method on January 10 at 3:14 UT. After 17 days of flight -with some troubles with the onboard computer- on January 27th at 2:30 UTC was commanded the main computer to interrupt the observations, to stow the telescope and switch off the power. At 3.00 utc a Hercules C130 headed towards the balloon that at that moment was flying over the Ross Ice Shelf about 230 miles (360 Km) Sout/East from McMurdo and at an altitude of about 124500 ft (37500 m) at 3:35 UTC the termination command was transmitted to the balloon. The slow descent of the payload lasted about 30 minutes and landed on the snow at 4:15 UTC. The landing was perfect and the payload standed upright.

Nevertheless, the first trip to the payload was delayed until febraury 13 when the team was able to land with a Twin Otter near the telescope and recover the pressure vessel containing the tape driver and the data tapes, another pressure vessel with some electronics, and a few more sparse small items. The rest of the payload remained in antarctica during the winter and was recovered in October that year.

This was the second antarctic flight of the instrument and on it were obtained near 50.000 images of the sun.