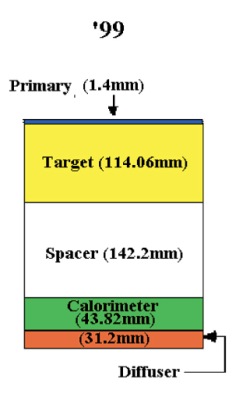 RUNJOB (RUssia-Nippon JOint Balloon program) was a scientific program started in mid 1990's to observe primary cosmic rays with use of the balloon-borne emulsion chambers. It was a bi-national effort between scientists of the P.N. Lebedev Physics Institute of the Russian Academy of Sciences, the Nuclear Physics Institute of the Moscow State University and scientists of the Faculty of Science and Technology at Hirosaki University, the Department of Physics at Aoyama Gakuin University and Faculty of Engineering of the Aomori University.

The project used for detection of the incoming cosmic rays emulsion chambers. At left we can see an scheme of the distribution of detector layers in the chamber of this particular flight.

The detector was passive, consisiting of photo-sensitive materials, targets and absorber materials. The chamber was divided into five parts: primary block, target block, spacer block, upper calorimeter and lower calorimeter or diffuser. Were used three kinds of photo-sensitive materials: nuclear emulsion plates, Fujy #200 type X-ray films and screen-type X-ray films (SXF). The primary module served to identify the primary particle. It was composed of several photo-sensitive materials only. The target module meant to produce the interaction was composed of acrylic plates or stainless steel plates which were inserted as target material. The spacer module used to separate the secondary particles which was mainly composed by styrofoam. A large spacer enabled to measure the emission angle of secondary particles. These data was used for energy estimation of primary particles. Finally the calorimeter module was used to induce and to observe the electromagnetic cascade showers. It was composed of multi-layered lead plates which were inserted with photo-sensitive materials. The calorimeter was different from orthodox calorimeter type chambers with thick absorbers (lead plate) of 8-10 radiation lengths due to constrains in weight. Since the volume of balloon used was 180,000 m3, the chamber was strictly limited within 250 kg in each flight to maintain an acceptable flight level. This condition inevitably forced to use thin-type emulsion chamber so in order to obtain the energy spectra of the cosmic-ray primaries using such a chamber, were devised complex methods for post-flight energy determination, charge determination, chamber efficiency calculation and so on.

The chamber was sealed inside a rigid aluminum box. Along with ballast containers and balloon instrumentation it was attached by ropes to the balloon main load bar which was in turn connected to the balloon via an open parachute. The balloons were launched from Kamchatka and flew across Siberia during a week until reaching the Volga River region where the mission was terminated before entering populated areas. The position and altitude of the balloon was monitored in flight by COSPAS system and a pressure gauge provided by the Russian side as well using ARGOS with GPS system provided by the Japanese side. After recovered, the chambers were transported to Russian and Japanese institutions that examined the tracks left in the emulsions by cosmic rays.