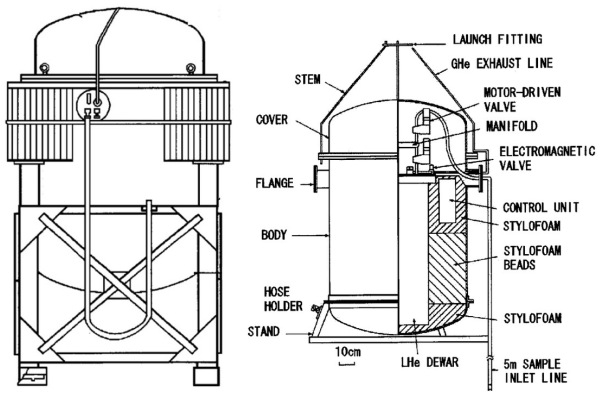 A schematic diagram of the cryogenic sampler is shown in Fig. at left (click to enlarge). It consisted mainly of 12 stainless-steel-sample containers, a liquid helium dewar, a receiver, a transmitter, a control unit and batteries; all these components were housed in an aluminum chamber pressurized at 1 x 105 Pa. The volume of each sample container was about 760 ml and the inner wall of each container was electrically polished. A motor-driven metal-to-metal seal valve was attached to each sample container. The other end of the motor-driven valve was connected to the sample intake through a manifold. Air samples were introduced into the containers through a 5 m bellows tube, of which one end was located 4 m below the bottom of the sampler to avoid possible contamination from it.

This flight was the first Antarctic launch of the sampler. As occured with the two flights carried out in 1997 in ESRANGE as part of the ILAS validation campaign, the sampler was fitted to a specially built gondola (which can be seen in the left image) made of aluminium that served to protect it from the hard conditions of landing which could occur in hard ice.