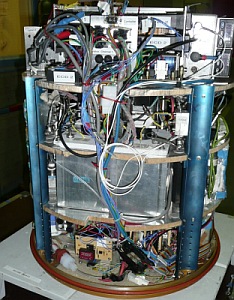 HAGAR is the acronym of High Altitude Gas AnalizeR a measurement device developed by the Institut für Atmosphären-und Umweltforschung an der Bergischen at Universität Wuppertal, Germany.

The instrument is an aircraft-based fast gas chromatograph for simultaneous in-situ measurements of trace gases like N2O, SF6, CH4, H2 as well as several halogen compounds in combination with an infrared sensor for CO2 measurements in the stratosphere.

Starting in 1999 the instrument was deployed several times on board the Russian high-altitude research aircraft Geophysica M-55 during many measurement campaigns around the world.

The balloon was launched using the auxiliary balloon method, from the CNES base of Aire Sur L'Adour at 19:41 utc on May 13, 1998. The flight profile included a slow ascent up to 30 km and subsequent slow decent to obtain a vertical profile with good vertical resolution. The instrument worked stably, but the lack of active temperature control of the pressure vessel during this flight caused large temperature drifts accompanied by drifts of the detector signals.