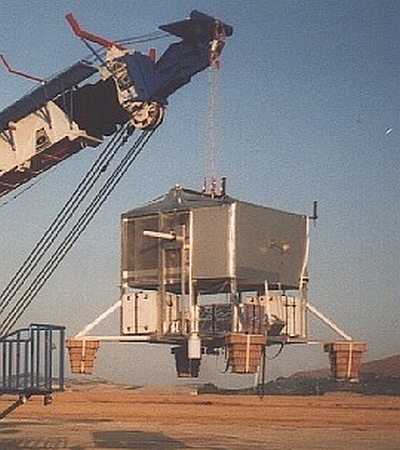 The HASI-PWA balloon campaign carried out at Trapani, Sicily in 1997 was meant to test the Permittivity, Waves and Altimetry instrument onboard the HUYGENS probe that would investigate the electrical properties at very low frequencies of the top meters of Titan's surface.

Several instruments were installed in a specialy built gondola: an instrument to measure AC/DC electric field coupled with acoustic measurements developed by the Instituto Astrofisica de Andalucia from Granada, Spain (IAA) along with Österreichische Akademie der Wissenschaften, from Austria, the Laboratoire de Physique et Chimie de l'Environnement from France and the European Space Research and Technology Centre (ESTEC) and an infra-red instrument to measure the airglow emissions of molecular Oxygen at 1.27µm developed by the IAA.

The main goals of the mission were to perform a trans-mediterranean flight from Sicily to Spain to obtain environmental information on flying relaxation type experiments on balloons and to measure AC field to enhance the measurements to be made by the same experiment carried on the Huygens spacecraft and those made by the Comas Sola Balloon in 1995.

The PWA part of the scientific instruments consisted of the following experiments: Relaxation Probe, AC-Field + Lightning, Schumann and Acoustic. The measurement timing used for the different experiments was exactly the same as for the Huygens HASI/PWA flight model with the exception of the relaxation probe experiment, where the slow sampling interval was 2.2275 seconds instead of 2 seconds. For the electrical measurements, the pre-EM booms and preamplifiers have been taken, whose characteristic is quite close to the actual Huygens flight booms.

Boom 2 was modified in the way that the Relaxation Probe 2 Sensor was removed from its original position on boom 2 and mounted on an extra boom, which was located inside a Faraday cage within the payload gondola frame. The Faraday cage was formed by an aluminium panel on the side where the boom was mounted, and by 2 layers of mesh foil on the other 5 sides. The mesh was made of 0.3 mm aluminium wire with 1.4 mm spacing. The cage dimensions were 980 mm (vertical) x 1880 mm (horizontal) x 1200 mm (deep). Two 10 mm-steel bars, part of the gondola instrumentation, passed through the cage from top to bottom. They were spaced 250 mm from the electronics compartment side of the cage and were spaced 800 mm apart. Their distance from the relaxation electrode was 845 mm.

For the acoustic measurements, a qualification model of the Huygens acoustic sensor has been used. The PWA-A and PWA-D units have been the same as during Comas Sola 1, with flight like standard for PWA-A and bread board standard for PWA-D. The PWA experiment used real time telemetry for data viewing and recording. The PWA balloon package contained a telemetry encoder board which encoded the experiment data into a 19.2 kBit/s bi-phase signal. This output was connected to the telemetry transmitter of the ASI telemetry pack. 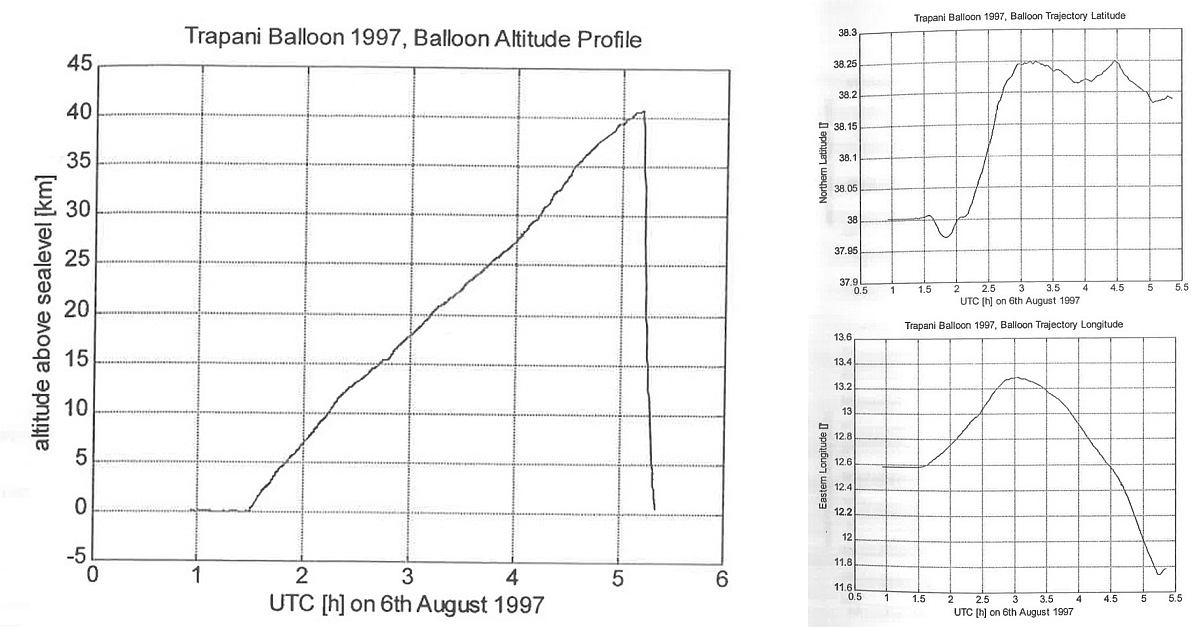 The balloon was launched by dynamic method at 1:28 utc on August 6th, 1997 from balloon launch base of Trapani in Sicily. The balloon reached an altitude of 40.8 km. However, an abnormal loss of altitude was soon detected that was tried to counteract with the ejection of 50 kg of ballast at 2:47 UT, and another 50kg ballast at 3:05 utc without success. A few hours later the flight was terminated and payload landed safely on the Mediterranean Sea not far from Trapani at 5:21 utc. Total flight duration was 3 hours and 53 minutes.

The measurements obtained during the short flight were not as good as in Comas Sola mission in León (1995). The gondola was quite different than the Huygens mock-up. The relaxation sensors were separated only 20.5 cm from the gondola (a metal box of 2 m size) which could produce many disturbances around it.