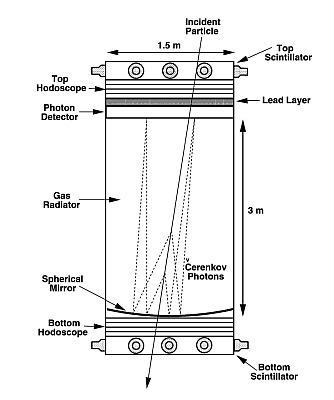 The Ring-Imaging Cerenkov telescope (RICH-II) was the second iteration of an instrument designed by the Department of Physics of Enrico Fermi Institute at University of Chicago. Its goal was to determine the energy spectra of light cosmic-ray nuclei over the energy range 30-150 GeV/n through a precise measurement of the angle of Cerenkov emission from each particle.

The figure at left shows a schematic cross-section of the detector system. It consists of three components: the scintillators, the drift chamber hodoscope system and the RICH counter.

The scintillators are composed of two sheets measuring 1.5 x 1.5 m2, 1 cm thick, of NE110 plastic scintillating material enclosed within a light integration box located on top and bottom of the instrument which measure the nuclear charge of each traversing particle, provide a fast coincidence trigger, and perform a time-of-flight measurement to determine the direction of particle traversal, Each box is viewed by twelve 12.5 cm diameter photomultiplier tubes (PMTs). The anode signals from the PMTs are summed for the top and bottom scintillators, respectively, and form a coincidence trigger.

The drift chamber hodoscope system consists of two identical sets of four drift proportional chambers, located above and below the RICH counter, respectively. Each set has one pair of chambers oriented in the X-direction, and one pair in the Y-direction. The chambers are operated under continuous flow of an argon/methane mixture (95:5). Each chamber, with an area of 1,5 x 1,5 m2, and thickness 2.5 cm, is enclosed by aluminized Mylar windows. The chamber is divided into seven parallel drift cells, each 20 cm wide with a sense wire at the center. The system determines the particle trajectory through the instrument, with a resolution of ~ 1 mm in both X- and Y-directions.

The RICH counter is composed of a 3 meters high and 1.5 m2 area filling the center of the detector volume. An array of spherical mirror segments is located at the bottom of the RICH counter, and the position-sensitive photon detector is on the top. A lead plate, 2 radiation lengths thick (1.12 cm) covers the entire instrument aperture above the RICH counter. The lead layer reduces the electron background by either absorbing low energy electrons or inducing electromagnetic showers, allowing the event to be rejected by data cuts.

The balloon was launched by dynamic method from Fort Sumner NASA base in New Mexico on October 4, 1997 at 16:25 utc. After a nominal ascent phase, the instrument spent 18.3 hours at float at an average altitude of 115,000 feet, before landing the next day 11 miles west of Apache, Oklahoma.

Approximately 9.5 million events were collected during the flight.