Balloon launched on 5/21/1996, from Holloman Air Force Base, Alamogordo, New Mexico, US

This flight was devoted to test a new balloon, as part of an Air Force developmental effort. The program was under the auspices of the Space Experiments Directorate of the Phillips Laboratory located in Albuquerque, New Mexico.

The balloon was a super pressure one constructed from 0.48 mil. extruded Nylon-6 film, EMBLEM. This was the fifth and largest balloon in the flight test series. The balloon, manufactured by Winzen International had a volume of 523,000 cubic feet with a gore length of 212 ft. It carried a payload of 175 lbs. The primary difference in the construction of this balloon, aside from size, as compared to previous super pressure balloons, was the use of a different adhesive, ARclad DEV 7876, to seal the gore seams. This adhesive had greater peel strength than that of the previous adhesive used on the earlier balloons. Because of the super pressure technique and static electricity considerations, the balloon destruct techniques were modified to provide electrical protection for the flight packages.

In addition, to the primary flight package, a stand alone Global Positioning System (GPS) unit was flown, which returned balloon positions through an INMARSAT/Internet combination. The flight was controlled through an on-board flight package which provided for uplink UHF commands and downlink S-band telemetry data. A LORAN radiosonde was also flown for backup positioning and real time meteorological data. 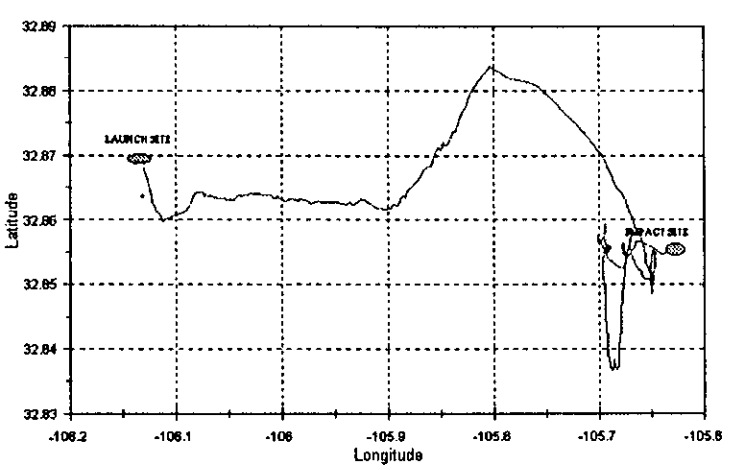 The launch operation was extremely smooth. It was performed from Holloman AFB, in New Mexico at 7:41 MDT on May 21, 1996 under calm wind conditions. After a nominal ascent phase the balloon reached a maximum altitude of 120,300 feet and failed. At failure, the burst termination system fired. However, the system descended at a very high rate indicating a collapsed parachute. A post analysis showed that the cutters failed to completely severe the termination line and that the balloon remained attached to the parachute, causing the parachute to collapse.

There is no information available about the aftermath of the developmental program.