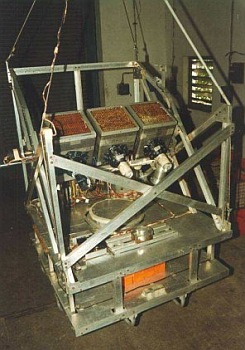 LASE stands for Large Area Scintillation counter Experiment and is a balloon-borne instrument designed to detect microsecond variations in the flux of X-ray sources in hard X-rays up to 200 keV. LASE is a third generation payload and uses modular detector design made with a combination of thick and thin NaI(Tl) detectors. The telescope consists of three modules of NaI(3mm) and NaI(25mm) crystals, arranged in a back-to-back geometry and having an effective area of 400 cm2 each. This innovative geometry helped in reducing the detector background by about 95%. The thickness of the two components in the back-to-back geometry are carefully optimized to give better shielding with less detector volume and low dead time. The field of view of each module is 4.5º x 4.5º and is deffined by a dismountable 1.3 mm thick slat collimator. The data is spectrum analyzed in 64 channels between 20 and 200 keV and each event is also time-tagged to an accuracy of 25 microseconds.

LASE payload as shown in the figure at left, has been in operation since 1997. Observations on the rapid variability of galactic and extragalactic X-ray sources in hard X-rays have emerged from the various flights performed.

The payload was flown successfully on Dec. 8, 1995 from Hyderabad, S. India. The balloon flight was launched at 4:55 IST and reached a ceiling altitude of 3.3 mbar. Apart from various calibration tests, four
X-ray sources namely, 3C 273, NGC 5506, Sco X-l and GX 1+4 were observed during the 6.5 hrs float period.