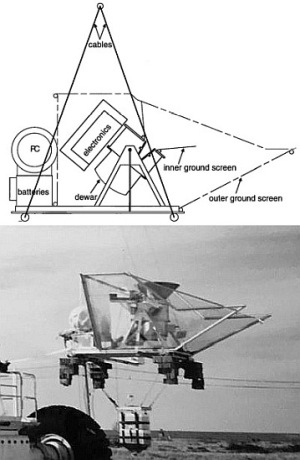 XPER was the acronym of X band exPERiment a balloon-borne instrument developed in mid 1990's decade be a collaboration between the Universities of Princeton and Chicago. The goal of the experiment was to measure the absolute temperature of the cosmic microwave background radiation (CMBR) at 10.7 GHz.

The payload which can be see at left (click to enlarge) was composed by a cold (25º Kelvin) corrugated horn antenna with a 158 FWHM beam coupled through a cold waveguide switch to a total power radiometer. The switch alternately connected the radiometer to the antenna signal and to an internal temperature-regulated reference load, which consisted of an iron-loaded epoxy absorber thermally sunk inside a 2.8 kg copper waveguide block. The switch period was 85 seconds.

The horn antenna viewed the sky through a thin polypropylene window that separated the Dewar vacuum from the ambient pressure when the balloon was at float altitude. The input of the radiometer incorporated a cryogenic circulator and a second temperature-regulated load to mitigate errors associated with small differences in the reflection coefficients of the horn and reference load.

The signal received was amplified in a cryogenic 9-12 GHz high electron mobility transistor amplifier. The gondola was located ~355 meters below the balloon, and rotated about once a minute for much of the flight, so that the instrument observed a broad swath of the sky. Most of the data was taken with the beam center at a zenith angle of 40º. The antenna beam was shielded from ambient temperature emission from Earth and the balloon by an inner ground screen attached to the Dewar, while a fixed outer ground screen provided additional rejection of ground radiation.

Years later, the design of the vacuum window mechanism implemented in XPER for the first time would be the base for the design of the double vacuum window mechanism implemented by the E and B Experiment (EBEX) which was a stratospheric balloonborne experiment designed to measure the polarization of the cosmic microwave background radiation developed at the University of Minnesota.