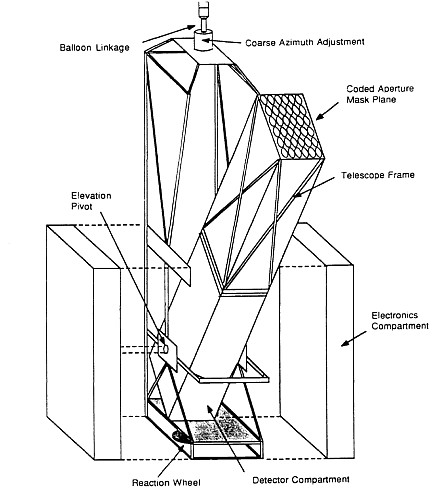 GRATIS was a telescope developed to perform the first arcminute imaging of cosmic sources in the 30~200 keV energy band, as an advance of a previous existing program called EXITE.

GRATIS was aimed to provide data relevant to several key problems in high energy astrophysics including the physical processes responsible for the high energy tail observed in the soft gamma-ray spectra of clusters of galaxies and the origin of both the diffuse and point source components of the gamma-ray emission from the Galactic Center.

The stabilized gondola was based on an inertial guidance system and a star camera. The gyro-based inertial guidance system provided three-axis pointing information with approximately 20 arcsecond precision. It was a true inertial guidance system with gyros, accelerometers, and an integral navigational processor. Once aligned and initialized, the system was capable of determining pointing direction, angular rates, latitude, longitude, and surface velocity. The gyros had high relative pointing precision, but had a slow drift. To correct it, was used a microchannel plate intensified CCD camera with an 8 inch diameter optical telescope as a star camera. Monitoring the video image at the ground station, allowed to correct for gyro drifts and maintain their absolute accuracy.

The instrument was launched three times, two in the United States and one in Australia. After the program's end, the technology used for the Sub Arcminute Pointing system from GRATIS was transferred and applied in the High Energy Focussing Telescope (HEFT), a more precise telescope aimed to observe high energy sources.

During this third and last flight of the instrument, a number of gamma ray sources, including Cen A and GRS 1915 were observed.