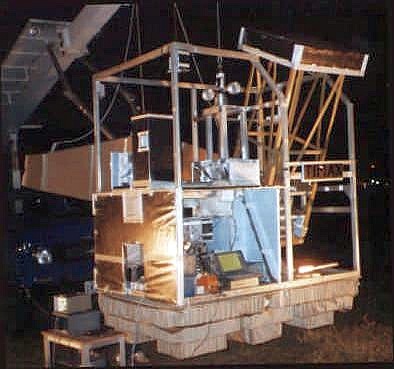 The TIMAX experiment, was the first X-ray imaging telescope entirely conceived, built and launched by a country in the Southern Hemisphere. It was a prototype for the much larger experiment MASCO flown in 2004 by the INPE.

The mask of the TIMAX experiment consisted of a 2 x 2 cyclic repetition of a basic 7 x 5 URA pattern, attached in one of the sides of a carbon fiber wheel (material completely transparent for hard X­rays). Each opaque element was a 4.45cm side square made of 3mm thick lead and 1mm thick copper material providing a graded shield. In the opposite side of the wheel, a bar which is also part of the mask and made with the same materials is supported in such a way that it is free to rotate around the center of the mask. If the bar rotates by 90º and the mask by 180º the scientists obtained an antimask of the original mask. This was a new and elegant way to get an antimask in coded-aperture telescopes with neither addition of an extra weight to the experiment nor further mechanical complex manipulations, which have always hindered the operation of similar experiments.

The position-sensitive detector (PSD) plane consisted of 35 cilindrical NaI(Tl) detectors, 2 mm thick and 4.45 cm in diameter, with an useful sensitive diameter of 3.18 cm, placed in a matrix array of 7 x 5 to be compatible with the URA pattern used. The total geometric area was ~400 cm2. Each detector was coupled to a photomultiplier and these were powered by five high voltage units (900 V). The detectors operated in the 30-100 keV range, set by lower-level and upper-level discriminators. The whole detector system was passively shielded on the sides and on the back by 3mm thick copper and 1 mm lead plates.

Each PMT pulse produced by a scintillation event due to a X-ray interaction in one of the detectors was analized in 32 energy channels. The on-board electronics then identified the detector in which the event ocurred, then added the event time read from an internal clock and finally a microprocessor formated all the information, including housekeeping data (temperature, atmospheric pressure, etc) of the gondola, for subsequent transmission by telemetry. There was no data storage on-board.

In order to allow the telescope to point at high elevation angles, the support system was designed to be placed off-center in the balloon gondola. In this way, the detector system, including the collimator and shielding parts, and the codedmask which was attached to a carbon-fiber wheel driven by a motor, were placed in one side of the gondola in a 'tower-like' metal structural frame supported and balanced by a horizontal axis that allowed the telescope to point in a specific elevation angle. On the other side were allocated the electronics rack, the telemetry system and the batteries. The entire gondola rotated in azimuth, with the pointing in a specific azimuth angle being controlled and stabilized by a system based on a geomagnetic sensor with a accuracy of 1º. The telescope 'tower' was positioned in elevation by a shaft encoder with a 0.5º accuracy. The pointing system was operated in manual mode through commands sent from the ground or in a semi-automatic way following the source path in the sky, given its initial position and the balloon velocity vector.

The total weight of the experiment (including gondola frame, telescope, electronics and telemetry racks, magnetometer, batteries and ballast system) was 600 kg. 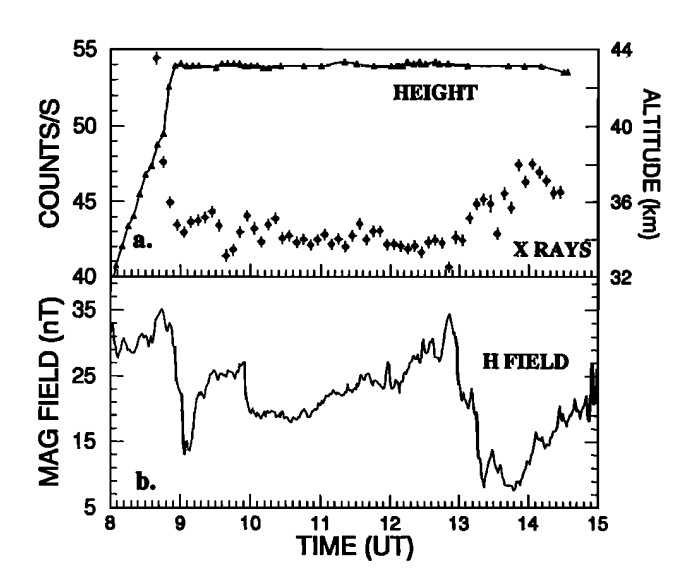 The balloon was launched on December 20, 1994, at 5:30 UTC from Cachoeira Paulista, Sao Paulo, Brazil and drifted in the westward direction at an altitude of 43 km until the flight was terminated at 14:25 UTC.

This was the second balloon flight of the TIMAX telescope after a first failed flight in 1993. The experiment was conducted to measure fluxes of precipitation electrons in the South Atlantic anomaly (SAA) region of Brazil. For the first time in the SAA, this detector system of high sensitivity monitored three events of increases in X ray fluxes which were associated with simultaneous decreases in geomagnetic H field component.