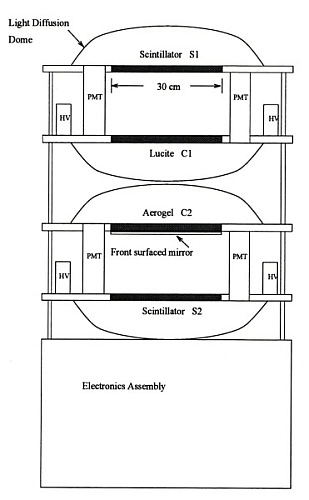 CRAYBEX was the acronym of Cosmic Ray Balloon Experiment a scientific experiment designed to measure the differential fluxes and spectra of the primary cosmic ray energy spectrum over a rigidity range of 100 MV ~ 73 GV. The counter had the form of a cosmic ray telescope possessing a geometric factor of 100 cm2, large enough to provide a significant counting rate. It was developed at the Department of Physics and Astronomy of the University of Calgary, Canada with funds provided by the Canadian Space Agency on behalf of the Canadian Network for Space Research.

At left we can see an scheme of the instrument (click to enlarge) which was a combination of a Cerenkov - Scintillator telescope. It consisted of four tiered detector elements (two plastic scintillator detectors with two Cerenkov counters in between). The scintillation elements S1 and S2, were identical in size and were 30 cm diameter disks of organic polyvinyl toluene 1 cm thick. The Cerenkov counters C1 and C2 were also 30 cm in diameter but have a thickness of 2 cm. The first, C1, was a disk of clear lucite while the second Cerenkov element, C2, was a fine lattice structure of silica called aerogel. The elements were sit in light diffusion domes fabricated of molded fiber-glass. Interior surfaces of the domes were coated with scintillator paint possessing good reflective and diffusive properties. The exteriors of the domes were painted, with several coats, flat black to inhibit influence of external light. The sides of the scintillators and the lucite disk not open to their domes, were painted first with scintillator paint then with several coats of flat black paint. The aerogel element was not suitable for painting and because of mounting problems required an under-support. To solve these problems a front surface mirror both supported the delicate aerogel and reflected its Cerenkov light into the dome. Each dome was viewed by four symmetrically placed 5 cm photomultiplier tubes (PMT). The PMTs were wrapped in teflon tape, magnetically shielded and encased in aluminum tubes for protection. Signals from two of the scintillator PMTs (one on top, one on the bottom) were used to verify events as having traversed all detector elements, defined as a coincidence. In addition, the signals had to occur in the proper time sequence, upper then lower, to discriminate against upward moving particles originating from the local splash albedo. Futhermore, each scintillator PMT signal was separately analysed and used to determine the location of passage of a nucleus through both scintillators to a horizontal accuracy of 2 to 3 cm. Via this "entopistic" technique each particle trajectory was revealed and included in the analysis of energy loss. The four PMT signals from each Cerenkov counter were integrated electronically to combat the low photon output inherent to the phenomenon of Cerenkov radiation by effectively averaging the signals. 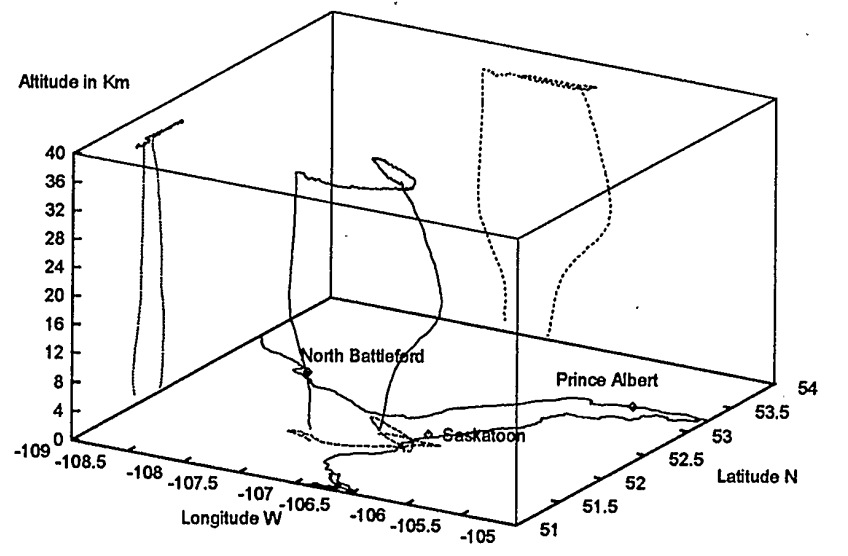 The balloon was launched on May 11, 1993 from the balloon launch facility of Scientific Instrument Limited (SIL) in Vanscoy, Saskatchewan. After a nominal ascent the baloon reached a float altitude of 36 km. The flight was a typical ''turnaround" flight (when the upper winds have undergone a seasonal turnaround and are most calm) in that the payload's ground track was never more than 50 km from the launch site and could be seen at all times. Upon termination of the flight the payload descended to the surface and landed without damage on a gravel road some 15 minutes travel from the launch facilities. Full recovery was completed in less than two hours.

Although the flight was perfect in terms of balloon operations, the results of the experiment were compromised by several failures noticed during real time and post flight analysis. The, most fatal failure appeared some 27 minutes into the flight, at an altitude of 23,000 ft, when the raw count rate fell to zero. A post flight review of CRAYBEX revealed the failure to be the result of an onboard -15 V power supply. This unit supplied power to the pulse-height analyser boards and its malfunction did not allowed a proper digitization of pulse-heights. The consequence of this failure was that CRAYBEX received no useful pulse-height spectra and hence no useful energy spectra measurements.