Balloon launched on 10/0/1993, from Holloman Air Force Base, Alamogordo, New Mexico, US 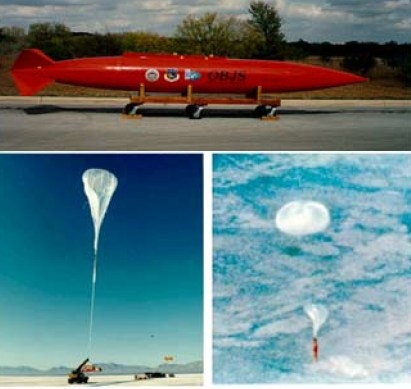 The Off-board Balloon Jammer System (OBJS) was the name of a prototype device developed in early 90's decade by the Southwest Research Institute. Department of Defense's Joint Electronic Warfare Center, based on Kelly Air Force Base, Texas funded the project whose requeriments called for a 150-lb electronics payload to float at 27.000 feet for six hours after an airborne launch. The OBJS was intended to allow surveillance equipment to remain in the target area for a much longer period without the need for a manned aircraft, thus saving the lives of the pilot and crew. It also was intended to be a very small target in terms of detection.

The prototype designed by SWRI was mounted inside of a modified F-111 external fuel tank to be easily transported to the target location. The deployment sequence was as follows: dropped from an aircraft at an altitude between 30.000 and 33.000 feet, the tank's tail cone would came off, releasing the OBJS payload, whose descent would be slowed first by a drogue parachute and then to the desired velocity by the main parachute. A balloon attached to the OBJS payload would be then released and inflated, and the parachute and canister detached at 14.000 feet. The balloon and payload would ascend to an altitude of 27.000 feet and remain there for at least 6 hours.

The balloon built by Aerostar was a special design able to carry 90 lbs to an altitude of 67.000 ft and was equipped with an internal inflation tube that allowed the rapid introduction of helium while the system was descending on the primary descent
parachute.

The balloon counted with a rip-stitch shock attenuation device which along the load tapes located on each seal of the balloon shell served to absorb the opening shock during the deployment sequence. The multiple wall construction of the shell allowed the balloon to survive the flagging that took place during inflation while the system descended on the main descent chute.

A successful free-flight airborne and inflation test of the OBJS system took place from Holloman Air Force Base, New Mexico in October of 1993.