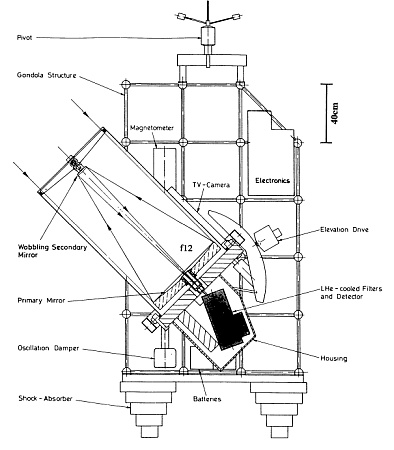 The objective of the flight was to obtain far-infrared imaging of the star-forming region W51A measured at 130 µm and 260 µm wavelength as well as several source parameters of W51-I. The instrument was composed by a 60 cm far-infrared balloon-borne telescope with a liquid-helium cooled photometer attached. A schematic of the complete system is shown at left. The Cassegrain-type telescope with a diffraction limited field of view was previously used in other experiments by the same group for the determination of temperature increases over active regions on the solar disk and the observation of IR sources from Cygnus.

The far-infrared section of the gondola consisted of a Cassegrain-type telescope with an attached photometer that served as detector of the incoming far Infra-Red radiation. This radiation was filtered by one of three selectable metal-mesh band-pass filters with central wavelengths centered at about 80 µm, 130 µm and 260 µm. The radiation was detected by a composite silicon bolometer working at a temperature of 1.7º Kelvin during measurements. In order to remove the high offset of the detector signal produced by background radiation from sky, atmosphere, and telescope it wais necessary to chop the signal by beam switching. This switching was achieved by wobbling the secondary mirror in the scan direction at a frequency of 8 Hz. The digitized detector signal together with housekeeping data were transmitted by telemetry to the ground station.

The balloon flight denominated MIL 1 was performed on the night of September 20/21, 1993. A 380.000 m3 stratospheric hydrogen balloon was used and the mission took place at Aire sur l'Adour, France. Launching took place by auxiliary balloon method at 17:45 UTC. After 3 hours of ascent the balloon reached his final altitude of about 39 km corresponding to an atmospheric pressure of 3.5 mbar. Since the stratospheric winds were strong, the balloon drifted rapidly eastward. At 1:00 UTC the telescope was stowed in vertical position to permit separation of the gondola which was drifting towards the Mediterranean. The gondola landed smoothly half-an-hour later near Limoux, about 20 km from Carcassone. It was recovered and returned to CNES on the same day. No visible damage resulted from the landing, except for the primary mirror, which was wet because of rain.

During this flight, the instrument mapped the continuum emission from W51A at 130 µm and at 260 µm wavelength. Also they succeeded in mapping the dust emission from the HII region-molecular cloud complex W51A at 130 µm and at 260 µm. In order to perform instrumental and radiometric calibration in-flight was also observed Saturn at those wavelengths. On the basis of these measurements, were determined several source parameters of W51-1, such as the color temperature, the hydrogen mass and the total infrared luminosity. In addition, were studied the emission spectrum, the surface brightness, the column density and the temperature distribution.