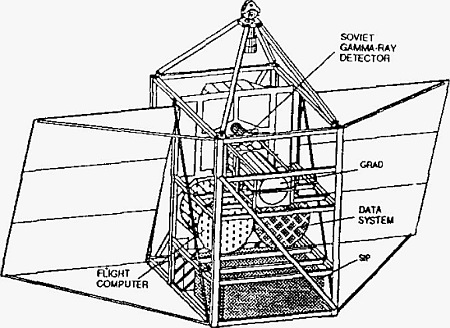 The Long-duration Antarctic Mars-calibration Balloon or LAMB was a balloon-borne project conceived as part of the United States-Russian Joint Balloon Working Group. The intent of this group was to develop balloon payloads for testing detector systems for future use on planetary space flight missions. LAMB included both gamma-ray and neutron detectors supplied by various US and Russian institutions.

One of the scientific objectives of any planetary mission is the measurement of the present properties of the planets. The determination of the elemental composition of a planet's surface can provide important geochemistry data and place constraints on its origin and evolution. When a spacecraft eventually attains orbit around a planet like Mars, onboard detectors will sense for example gamma rays being emitted from the Martian surface. Such emissions, which come from atoms rendered radioactive by cosmic-ray bombardment, can be used to decipher the composition of the planet's outer layer, thus ultimately allowing researchers to map the geochemistry of Mars. To gauge how accurately the detector will work on distant Mars, scientists must first test it on a sample of known composition. Unfortunately, a detector flying above the earth cannot "see" through the dense atmosphere to the surface the same way it would be able to view Mars through that planet's thinner atmosphere. To mimic more closely the conditions the spacecraft will face, LAMB carried aloft a hopper filled with about a ton of earth soil (in this case from the ice-free valleys near Ross Island in Antarctica). This material, which is of known composition, served as a stand-in for Martian soil. The U.S. and Russian detectors peered down into the hopper from a distance of only a few centimeters and measured the soil's emission of gamma rays during the flight. The soil was then dumped into another hopper beneath, enabling the researchers to take a background reading of cosmic ray flux.

In the scheme left above we can see a basic scheme of the LAMB gondola and the distribution of detectors and main subsystems. More details can be seen clicking on the image.

The set of instruments onboard was composed by Gamma Ray and Neutron detectors. The main US gamma ray detector was known as GRAD or Gamma Ray Advance Detector and consisted of a high purity n-type germanium crystal diode inside an active Bismuth-Germanate (BGO) shield with an active plastic charged particle shield across the aperture. GRAD was the same detector which flew in 1988 in the first Antarctic long duration balloon flight. The germanium crystal was right circular cylinder 5.5 cm in diameter and 5.7 cm high. The detector had a relative efficiency of 30% compared to a standard Nal detector. It was cooled via a metal rod into a liquid nitrogen dewar of 36 liters. This provided approximately two weeks operating time.

The Soviet gamma ray detector consisted of a thallium activated cesium iodide [Csl(TI)] scintillation crystal 10 cm in diameter by 10 cm long mated to a photomultiplier tube (PMT). It had an energy resolution of better than 12% at the 662 KeV line of 137 Cs. The PMT high voltage supply was self contained as was the temperature control subsystem.

Two of the US neutron detectors consisted of a photomultiplier coupled to a 0.5 cm thick, 300 cm2 area trapezoid-shaped plastic scintillators. One scintillator contained 5% natural boron by mass and was identical to the flight scintillator comprising the anticoincidence shield-neutron detector of the Mars Observer Gamma Ray Spectrometer. The second had a shape similar to that of the first but contained no natural boron. Whereas the first detector responded to thermal and epithermal neutrons, gamma rays and penetrating charged particles, the second responded only to the gamma rays and charged particles. The second detector therefore measured the non-neutron background for the first. Both instruments were housed in identical, hermetically-sealed cylindrical containers mounted on the side of the soil hopper and well above the level of the soil after its release to the second container in the gondola for measurement of the background. Both were also backed by identical, boron-loaded material sufficiently thick to assure that thermal and epithermal neutrons enter only from the soil hopper direction.

Another set of US neutron detectors was used to measure the neutrons produced in and moderated by the atmosphere. Two 3He proportional counters were dangled about 30 feet below the gondola. At this distance the neutrons originating in the gondola structure and payload were a minor part of their count rate. One of the counters was surrounded by cadmium while the other had no special coating. This was similar to two of the Soviet detectors. With these detectors the atmospheric thermal and epithermal neutron flux was measured.

The LAMB gondola structure consisted of a modular rectangular structure built with high strength aluminum tubing topped with a pyramid holding the gondola's rotator. Integral to the rectangular structure was an aluminum wall that served as the gondola's backbone. This aluminum plate formed the rear wall of both the upper and lower soil hopper. The gondola has been sized so that it may be easily loaded into an KC-130 aircraft. The gondola contained two soil hoppers for movement of the soil, two pressurized chambers that contained the flight computer and data system, three independent power systems with ear mounted solar arrays and a passive thermal system that radiated waste energy and reflected the earths albedo. Total payload weight was approximately 1640 Kg.

The gondola had an upper and lower soil hopper which contained 650 Kg of soil. During the data acquisition phase of the flight, soil was contained in the upper soil hopper in full view of the instruments. Later the soil was dropped into the lower hopper where it was used as supplemental ballast. The lower hopper was divided into 10 equal segments while the upper soil hopper was divided into three segments. The instruments were mounted around the upper soil hopper. Each instrument was attached with a quick release mounting structure utilizing single point locking pins that allowed instrument removal with a minimal amount of effort should there be a limit on recovery time. Snow skis were mounted on either face of the gondola structure to allow the entire payload to be more easily skidded for recovery.

LAMB gondola power was about 472 watts for the science electronics and data system. LAMB was equipped kith three independent 200 watt photovoltaic power systems. Each with a 10 hour silver nitrate reserve battery. Due to the high albedo received during the flight the pressurized chambers needed to dissipate a considerable amount of power. This was accomplished by coupling the chambers to the soil hopper. The hopper and framework acted as a large radiator surface while the soil acted as a thermal sink during the mission.

LAMB'S flight computer consisted of a low power IBM-PC compatible computer developed for industrial applications. All flight data was stored onto two Write Once Read Many (WORM) optical disk with a storage capacity of 600 mBytes each. The science data system used an industry standard CAMAC crate equipped with nuclear instrumentation modules that gathered detector data into histogram arrays with ten minute integration periods. The flight computer compressed the instrument data, log it onto optical disk, and build it into data packets that were sent to the ground by the telemetry system.

The balloon was launched from Williams Field, near McMurdo Station on December 13, 1992. After a nominal ascent it reached a float altitude of 36 km and circumnavigated the pole at an altitude that varied between approximately 36.6 km and 30.5 km during 13 days. The flight was terminated on December 26 and the most critical components of the payload were recovered and returned to Williams Field by December 28.