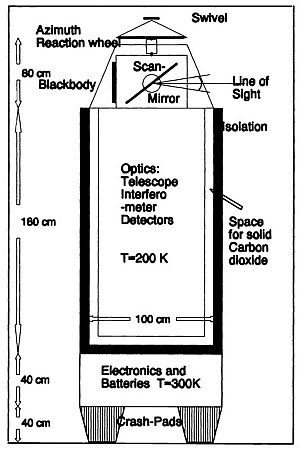 The balloon was launched by CNES using the auxiliary balloon method on March 14, 1992 from Esrange. Apart from minor electrical disturbances, the performance of all systems was excellent. At 03:37 utc, on March 15, 1992, during cut-down operation, the shaft of the azimuth decoupling system broke, and the gondola performed a free fall from an altitude of 32 km. At impact on a frozen lake near Nikel, Russia the whole instrument was completetly destroyed.

This was the fourth and last flight that involved an early version of the instrument known as MIPAS-B1 and the second flight from high latitudes in the framework of a major atmospheric research campaign. As mentioned above, the destruction of the instrument impeded the evaluation of the telemetered data by the loss of the film of the star-camera, which would
have served as absolute reference for the pointing data.