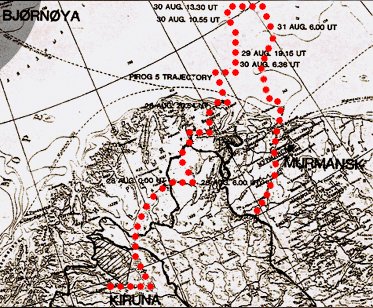 After a failure and a landing in a swamp, in the previous mission, the gondola was refurbished and ready for flight three months later. It was launched as PIROG 5 -the sixth mission of the program- from the European Space Range (ESRANGE) near Kiruna, Sweden. This time the launch and flight was nominal but when the cut down command was sent to separate the payload from the balloon, nothing happened. The backup system, also failed leting the scientists nothing else to do than to helplessly watch the balloon drift slowly North-east out over the Arctic Ocean. After a few days it turned to South-east and drifted over the Murmansk area in Russia. It continued to drift south for a few days and then disappeared somewhere in the western part of Russia. The soviets who were tracking the overflight of the runaway balloon in their radars, probably remembered the US efforts to spy Russia using balloons in late 50's, and took the balloon as a reconnaissance device. Thus they dispatched two Sukhoi fighters to intercept and shootdown the visitor. Incredibly, the gondola landed rather undamaged in a wooden area near the finish border. Several months after the incident, following some diplomatic negotiations it was eventually returned to SSC.

However, the scientific outcome of the flight was significant as the prolonged flight offered the scientist the possibility to obtain data of their astronomical targets twice the time originally planned.