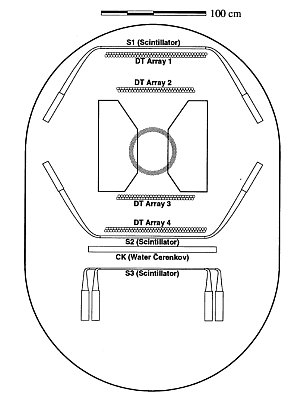 SMILI (sketched in the figure at left) was an instrument that was designed to measure the isotopic abundances of cosmic rays over a large range of elements, from hydrogen to boron, and over a large range of energies, from below 100 to greater than 2000 MeV. It was a direct descendent of another instrument called PBAR, flown in 1987 which was optimized for low background antiproton studies.

At the heart of SMILI was a split-coil, room-temperature bore, superconducting magnet with a field of 1.5 Tesla and an acceptance of 205 square cm. As charged particles entered and exited the magnet bore, their positions and directions were measured by an array of 510 thin-walled drift tubes arranged in four modules, two with the tube axes parallel to the magnetic field (the bending view) and two with axes perpendicular to the field (nonbending view). Each module consisted of two sections of two close-packed planes, providing a total of 16 planes. A 20 micron diameter gold-plated tungsten wire was strung down the center of the tube while a gas mixture of 50% argon and 50% ethane flowed serially through them, slightly above the ambient gondola pressure of 1 atm. Each tube is read out from one end by an amplifier/discriminator, and the discriminated signals are fed to time-to-digital converters (TDCs).

The time-of-flight (TOF) system consisted of two planes of plastic scintillator located 1.8 m apart, and formed each plane of several scintillator slabs 100 cm long by 25 cm wide by 1.9 cm thick. S1 was located above the upper drift tubes and included four such paddles, while S2 was located below the lower drift tubes and included three. The scintillation light was channeled through bent light pipes into photomultiplier tubes (PMTs), one at each end of each paddle. After passing several electronic filters and discriminators the signals are fed to TDCs where the time and pulse height were used to determine particle velocity and charge.

A water cerenkov counter is located below S2 to provide a redundant measurement of the particle velocity and to improve the resolution of the TOF system. It uses higly purified water as radiator medium, stored in a light integration container 5 cm thick and approximately 100 cm by 90 m in size. It is viewed by 20 PMTs arranged in pairs.

Finally at the bottom of the instrument placed directly below the CK detector was an interaction detector (S3) consisting of four slabs of plastic scintillator viewed at each end by several PMTs through light pipes. This provided an additional measurement of the particle charge and was used to reject events which interacted in the CK detector.

All the information of the events detected is readout using a LSI-ll/73 microcomputer, and telemetered to the ground station using a pulse code modulated signal. In addition to event data, periodically the flight program would telemeter also housekeeping information (temperature, pressure, supply voltages, etc.) andcalibration data from SMILI subsystems. The demodulated data stream was recorded on analog tapes by the National Scientific Balloon Facility, while a digital data stream was monitored in real time by the SMILI ground station which also has the ability to send simple commands to the instrument which were used to control the high voltage levels and other instrument parameters.

The entire instrument was surrounded by a egg-shaped aluminum shell covered with polyurethane foam, painted white, which serves as a passive thermal control system insulating the detectors while reflecting incident sunlight.

This was the first mission of the instrument. All subsystems operated satisfactorily throughout the flight. A total of 2.500.000 events were recorded.