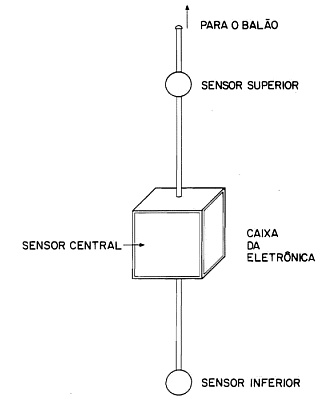 The electric field detector consisted of a pair of probes aligned in the vertical. The probes were two espheres with a diameter of 22 cm. The distance from each of the vertical probes to the central box was 1.6 meters. To minimize the incidence of solar radiation in the probes, mainly for wavelengths between 199 and 230 mm, which would produce photoelectrons altering the signal, the probes were painted with a aqueous carbon solution ("aquadaq"). The arms on which were mounted the probes must have high impedance, so these were made of fiberglass.

The two probes worked as a parallel circuit for the electric current. Thus, in order to not distort the field to be measured, the internal resistance that linked the conductors was greater than that of the atmosphere. For this purpose the signals originated in the probes passed through an impedance cascade. These signals, both AC at 2 KHz measured at probe as DC, were transmitted multiplied by different factors, in order to be able to measure different amplitude ranges of existing electric fields.

The experiment also included an altimeter consisting of a Sensyn type pressure sensors, as well internal and external temperature sensors. Finally the tracking of the balloon was done by an onboard OMEGA transmitter.

The balloon was launched by dynamic method from the INPE balloon base in Cachoeira Paulista, at 9:20 local time. The balloon initially moved to the north while ascending but soon after reaching float altitude of 32 km it started in a westward course that will lead it to cross the Minas Gerais State as we can see in the map at left (click to enlarge).

After 11 hours of flight, the mission was terminated by telecommand. The payload was recovered in Mogi Guacu, Sao Paulo State, Brazil.