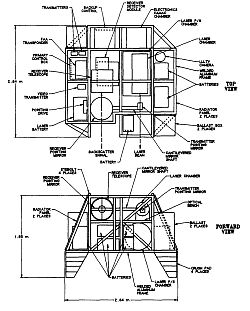 A series of lidar experiments has been conducted using the Atmospheric Balloonborne Lidar Experiment payload (ABLE) as a demonstrator of the development of the needed technology for space lidar platforms, to be deployed in the future on the Space Shuttle or on a dedicated satellite.

The ABLE lidar used a biaxial optical system with a multimode, frequency tripled, Nd:YAG laser transmitter and 50 cm Dall-Kirkham receiver optics. The flashlamp-pumped laser transmitter and power supplies were mounted in hermetically sealed pressure chambers which were maintained at an ambient pressure during flight.

The flashlamp thermal power was removed from the rod cavities by a primary cooling loop containing a mixture of deionized water and ethylene glycol, and transferred through a liquid-to-liquid heat exchanger to a secondary trichloroethylene cooling loop. This loop circulated the coolant through two outboard radiators where the laser system thermal load was dissipated by radiation and convection.

When the payload was configured for flight with batteries, balloon control electronics, telemetry electronics, ballast, and a recovery parachute, the launch weight was approximately 1270 kg.

The biaxial lidar system was mounted on an optical bench made of a rigid trussed structure of welded aluminum angle. Prior to payload fabrication, extensive structural and thermal analyses were performed to predict structural deflections.

The lidar could be commanded to point 30° from zenith, in the horizontal direction, and 2° from the nadir. The pointing of the lidar in the azimuth direction was not controlled but was monitored by a magnetic compass. Lidar beam steering was provided by a small multilayer dielectric laser pointing mirror and a 50 by 72 cm plane receiver pointing mirror. These mirrors were mounted on a common rigid shaft so that thermal variations did not affect their co-planar alignment.

Lidar safety was a major consideration in the operational planning for each flight. Laser operation in flight required the simultaneous transmission of commands from the ground station to the payload over two independent RF links. During flight, nadir lidar operation was not permitted unless the payload was above a specific altitude and over White Sands Missile Range, NM.

Prior to each launch the flight configured payload was subjected to a simulated flight test, in an environmental chamber, at the thermal and pressure conditions to be encountered during ascent and float.

The balloon was launched by dynamic method from Northrop Strip, in the White Sands Missile Range on 15 September, 1988.

The balloon drifted acording to the flight plan, 24 km east during ascent. At 18 km of altitude the flight path reversed to the west. After drifting approximately 48 km back over the range at a 21 km float altitude, the flight was terminated.

During parachute descent the mid-altitude easterly winds drove the payload back to an impact point approximately five miles west of the original launch site.

This was the third and last balloon-borne mission of the instrument. For this flight the lidar receiver used in the previous two missions was redesigned so that in addition to obtaining Rayleigh and Mie scattering, Raman backscatter measurements could be made.

Also the lidar pointing system was modified to permit backscatter measurement at a series of angles from nadir. By making Rayleigh and Raman measurements at each angle, the aerosol backscatter coefficient could be determined.

After launch, the lidar, pointing at 30 degrees from zenith, was turned on immediately so as to obtain low altitude Raman data. Good quality data was obtained throughout ascent and into float.