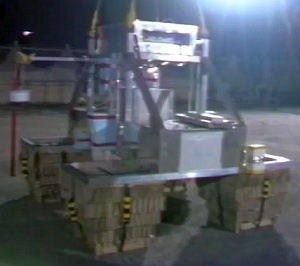 The objective of the flight was to test telemetry and remote control balloon systems, built by technicians of the Consiglio Nazionale delle Ricerche (CNR). A second aim of the experience was to verify the ability of the personnel during launch, as it was the first time such an operation was performed by an entirelly Italian team. In the image at left can be seen the gondola used for the experiment during preparations.

The reference came from a 27 minutes documentary shot during the launch operations. The film show all the preparations for the launch, the inflation of the huge balloon of 800.000 m3 of volume, and the moment on which the balloon failed at launch as it was deffective.

Sadly the website that offered the film over the internet, denominated "Reparto di Cinematografia Scientifica CNR" is no longer available. However, one of the participants of the project uploaded recently the video to it's youtube channel (see below).

Video footage of the balloon launch

Balloon failed in the ascent phase.