OBSERVATION OF THE SUN CORONA 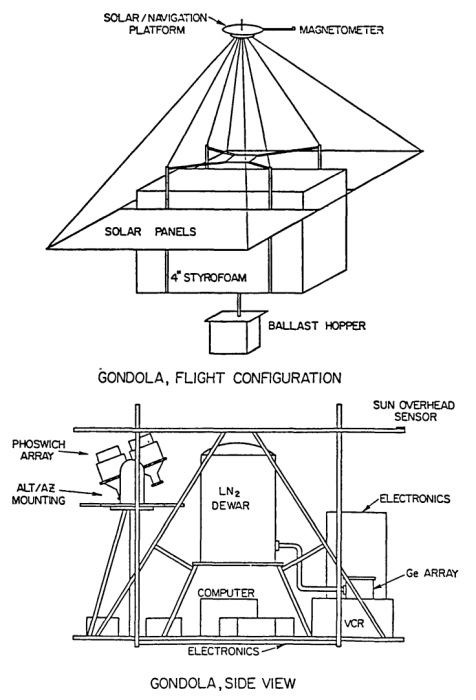 The objective of the flight was to study the processes of energy release, particle acceleration, and heating of the active corona, in hard X-ray microflares and normal flares during a long duration balloon mission. The payload -a complement of hard X-ray and gamma-ray detectors- was developed and fabricated by the Space Sciences Laboratory, University of California, Berkeley, in collaboration with the Lawrence Berkeley Laboratory, the University of California, San Diego, and the Centre d'Etude Spatiale des Rayonnements, Toulouse, France.

The figure at left shows a schematic draw of the payload. The detectors were composed by a 50 cm2 array of four 1.3 cm thick planar germanium detectors cooled by liquid nitrogen and surrounded by a CsI/NaI anticoincidence well that provided high spectral resolution measurements of hard X-rays and gamma-rays from ~13 to 600 keV. A 160 liter dewar provided a cooling lifetime of ~ 20 days. The detectors pointed straight up with a field of view of ~30° FWHM. Two 3 mm NaI/38 mm CsI phoswich scintillators, one 300 cm2 and one ~200 cm2, provided for high sensitivity measurements of hard X-rays between ~20 and 300 keV. These detectors were collimated to ~15° FWHM field of view and pointed by an alt-azimuth pointing system to ~1° accuracy. An experimental set of new solar total irradiance detectors completed the instrumentation.

The array of detectors were housed in a gondola which outer frame was a structure approximately 9 ft. long by 5 ft. wide by 7 ft. high. Within this frame was a styrofoam box of 4-inch wall thickness coated with aluminized mylar on all surfaces. Thermally insulating spacers extended through the styrofoam to support the inner frame structure which holded all of the components. The collimated and pointed scintillator detector assembly was mounted at one end of the inner frame at a location such that the field of view was clear for all pointing directions. The germanium detector assembly was mounted at the other end of the frame for a clear vertical field of view. As this instrument used high-purity germanium detectors, a 160 liter liquid nitrogen dewar was mounted in the center of the gondola where the nitrogen usage has no effect on the overall balance. The computer, the various instrument support modules, and the batteries were mounted on the floor of the inner frame. Two water-ballasted panels on the long sides of the inner frame provide heat sinking for the heat dissipating units such as the servo amplifiers and the various transmitters used on the gondola. The primary purpose of the water ballast was to maintain an acceptable minimum nighttime temperature for the electronics. During the day, excess solar panel power was used to reheat the water if necessary. To maintain altitude for the flight, and to insure against extremely cold thunderstorm cloud conditions, the 2100 lb gondola with parachute was accompanied by an additional 900 lbs of ballast at launch. The ballast hopper was suspended below the gondola from the outer frame. An automated ballast release system, controlled by altitude sensing equipment, was provided by the National Scientific Balloon Facility (NSBF).

The power system consisted of approximately 167 sq.ft. of solar panels, a battery charge regulator, a 28-volt stack and a 12-volt stack of lead-acid gel batteries. To conserve power, only those detectors that were highly directional were actively pointed. The rest of the gondola rotated with the balloon. For direction reference, a small platform equipped with several optical sensors and magnetometers was mounted above the gondola. A servo system rotated the platform to track the sun in azimuth for solar elevation angles of 0 to 82°. An optical sensor with a 16° opening angle wasmounted on top of the gondola pointed vertically upward. This sensor marked the platform control when the sun was within 8° of overhead. For sun angles higher than 82° or at night, the platform was rotated to point to magnetic north.

For most of the duration of the flight, the balloon was out of range of the ground VHF/UHF receiving station for high-rate data. The only real-time data link was via the GOES satellites, with about 60 bits-per-second (bps) telemetry capability which was used to obtain limited real-time data and event data. The bulk of the data was stored on-board using a high density tape recorder built from a commercial portable VCR unit together with a PCM board removed from an audio digitizer.

The balloon was a standard zero-pressure flown using the RACOON (RAdiation COntrolled balloON) concept on which the temperature of the gas, and therefore the balloon altitude, was controlled by the radiation received from the Sun and the Earth. Thus the balloon was at high altitude during sunlight hours but dropped during nighttime. If the balloon initially reaches a high daytime float altitude it will remain above the tropopause in its day-night excursions under normal conditions without ballast drops. Then, flight durations are limited only by balloon lifetime and gas losses (which can be offset by ballast drops).

Launch occured at 21.00 UTC on February 9, 1987 from Alice Springs in Central Australia. Due to a malfunction of the ballast control system all 900 lbs of ballast were dropped at launch. The balloon thus flew unballasted for the entire flight. With the loss of ballast the ascent was extremely rapid (~ 1500 ft/min) and the balloon reached a float altitude of ~132.000 ft (~2000 ft more than normal). Some of the helium was vented and perhaps some leaks developed from the stress of the fast ascent. The daytime float altitude generally decreased troughout the flight. Preliminary analysis indicated that helium was lost at a rate of 1-2% per day, possibly from a small leak. The gas temperature and therefore the float altitude were determined primarily by the radiation the balloon receives from the sun and the earth. Cold storm clouds below the balloon were apparently responsible for the unusual deep drops in altitude.

The balloon started westward at an average rate of ~ 30° longitude per day ( ~130 km/hour), but slowed down as the balloon altitude decreased. Finally after 12 days of flight crossing the entire Indian Ocean, Africa and the Atlantic Ocean the payload was commanded to cut down over Brazil, and was recovered with relatively minor damage in the Palotina municipality in Parana state. All the detectors, the experiment data system, and electronics functioned perfectly.