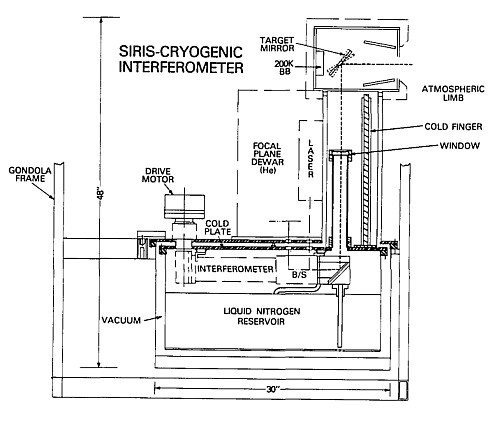 SIRIS was the acronym for Stratospheric InfraRed Interferometer Spectrometer an emission-mode remote-sensing instrument developed at the NASA Goddard Space Flight Center during the 1980's decade for measurement of the earth-limb from a balloon platform. The instrument was built to further understanding of ozone behavior in the stratosphere and catalytic cycles which control the ozone concentration.

The interferometer output was directed to five Si:Ga photoconductor detectors inside a liquid Helium Dewar; one detector was for the wide band and the other four were for the narrow bands of the spectrum. The instrument was capable of operating from a balloon platform for periods up to 30 hours, thus allowing the concentrations of trace species to be monitored through a complete diurnal cycle. Use of the emission mode allowed observations at all times during the diurnal cycle and along a line of sight (LOS) of constant local time (either north or south). Remote sensing of the limb allowed vertical coverage from the middle troposphere to 40 km (the balloon altitude) with a vertical resolution of 3 km (1/2 scale height). Observations were taken at a series of tangent heights (the so-called limb sequence) and inverted to obtain gas concentration vs altitude.