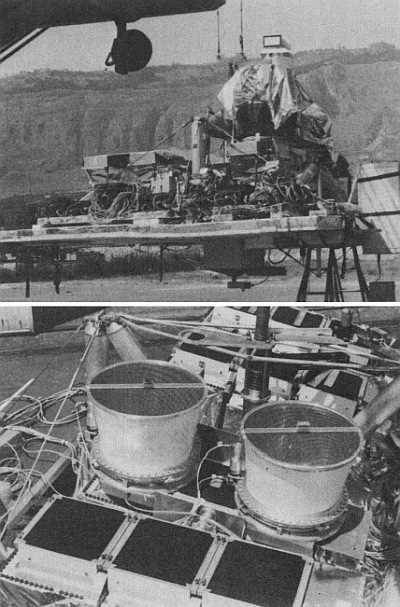 POKER was a balloon-borne instrument, designed and built at the Istituto di Astrofisica Spaziale of Frascati, Italy in the 80's devoted to perform observations of cosmic sources in the field of hard X-Ray Astronomy. The core of the concept behind the experiment was a very large array of MultiWire Proportional Counters (MWPC).

The detectors array consisted of three multiwire proportional counters with a geometric area of 2,700 cm2 each to provide a bulk sensitive area of 8,000 cm2. Each detector consisted of a stainless steel vessel 2 mm thick with dimensions 1.200 mm x 450 mm x 180 mm with an entrance window made out of a sandwich structure of a "honeycomb" layer 2 cm thick glued to 2 alluminum foils 300 microns thick. A further layer of 600 micron of carbon fibre was used to strengthen the whole window structure which was able to withstand an internal pressure of 10 bars. The active volume of the chamber was internally divided into 60 cells arranged into 5 different layers with cross section 30 x 30 mm and a lenght of 1100 mm. The anodes were separated by grounded cathode wires that provided the wall-less ground geometry for each cell. The anodes were 20 microns diameter gold coated molybdenum wires while the cathodes were 40 microns thick. The two sides and the bottom side of the counter, containing 24 cells, were used as anticoincidence section. A further passive shield of 1 mm of lead was wrapped all around the detector vessel. This configuration passively absorbed low energy charged particles and X and soft gamma-ray background photons. It also vetoed produced secondaries. Furthemore, all the anodes were in mutual anticoincidence with each other in order to veto charged particles and showers which triggered more than one cell. The field of view was limited by copper exagonal collimators with 5º FWHM. In this way the detector was screened against the cosmic and atmospheric background. The three detectors were filled with a mixture of Xenon -Argon (80 % -20 %) at a pressure of 3 bars and were calibrated with radioactive sources at various energies.

The experiment in the original configuration (1981) was flown with 4 detectors. For later flights only three MWPC's were flown, but to provide imaging capability to the payload, one of the MWPC's was equipped with two Rotation Modulation Collimators (RMC's). The RMC's were developed at the Astronomisches Institut of Tubingen University of Germany and were automatically synchronized, covered two of the three detector windows providing 1600 cm2 of the module area. Each RMC consisted of two corotating planes of parallel X-ray absorbing Molybdenum wires. The wire diameter and free space between wires was 2 mm. The separation of the two planes was 340 mm, defining an instrumental angular resolution of 20 arcminutes.

Also, to be able to take optical RMC images of the night sky during the flight, one of the two RMC's was raised and the space between this RMC and the detector window was filled with an optical mirror made of Polyurethan foam and aluminized Mylar foil, which was transparent to X-rays above 15 keV. A photomultiplier in the focus of this mirror recorded the modulated optical flux from stars within the 5 degrees field of view around the X-ray source being observed. In this way, the scientists could observe both the X-ray sky and the optical sky through the same optics to establish the absolute viewing direction very reliably.

Spectral information from the target source was obtained by performing either a drift scan or a tracking alternately on the source and background. To perform the pointing and/or scanning of the X-ray source was necessary to fully steer the telescope from ground with an accuracy of about 1/10 of degree. The detectors array were mounted on the central cage of an altazimuthal platform digitally driven in azimuth and zenith by means of three aspect motors controlling the zenith movements, the inertia weel and the central pivot. The zenith was controlled via a 12 bit shaft encoder, and the azimuth with a three axis magnetometer digitized on a 13 bit dedicated firmware processor. The aspect parameters were cross-checked during the flight by a sun sensor, giving a resolution of 3 arcmin during day time and a star sensor performing a similar accuracy during night measurements.

Total weight of the experiment fully assembled in flight configuration was 1.600 kg.

The balloon was succesfully launched from the Milo Balloon Facility, in Sicily, Italy on August 5, 1985 for a trans-mediterranean flight. Four hours after the launch it reached the expected ceiling altitude of 3 mbar which was maintained for about 15 hours. The experiment was cut down 23 hours after the launch, over Spain.

All flight systems were properly behaving as checked in real time with the GSE. Many pointed observations were obtained on the Crab (which was also used as in-flight calibration source), the transient source A0535 +26 and the two variable Active Galactic Nuclei NGC4151 and MCG 8-11-11.