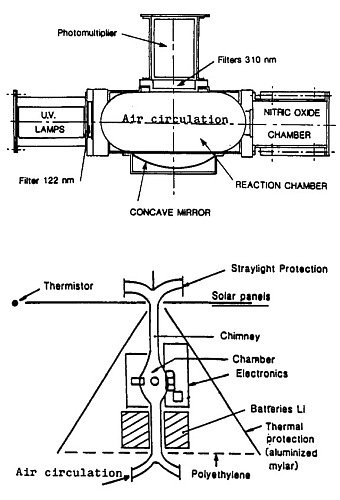 The objective of the flight was to measure stratospheric water vapor on a long duration balloon mission. The experiment designed by the Service d'Aéronomie of the Centre National de Recherche Scientifique (CNRS) from France was specially adapted to the constrains in weight, power and telemetry impossed by long duration balloons in order to perform observations in the lower stratosphere in particular in the Micronesian region where air enters the stratosphere from the troposphere, an area known as the "Stratospheric Fountain".

At left we can see an scheme of the instrument itself (up) and a diagram of the flight gondola (down). The working principle consisted in observing the fluorescence of the hydroxyl radical OH produced by photodissociation of stratospheric water-vapor by UV radiation. The ultra violet source was an hydrogen lamp manufactured at the SA laboratory, coupled with a Lyman a filter at 122 nm. For redundancy two lamps were used alternatively, which signals were monitored by a nitric oxide ionisation counter (NO counter) mounted in front of the lamps. Fluorescence measurements were made by a photomultiplier working in photon counting mode coupled with two filters centered at 310 nm. Its axis was perpendicular to the UV beam. Due to weight limitations, no turbine to renew the air, and no stainless steel sealed chamber pumped before the flight could be used. To reduce the outgasing contribution, the instrument was placed 200 m below the balloon and 100 m below the service gondola. A flow was insured inside the reaction chamber by the use of an aluminium chimney simply heated by collecting the upwelling infrared radiation from the earth with a thermal cover designed as the MIR itself. Straylight protections were mounted at the two exits of the chimney. The calculated air speed inside the chamber was 50 cm/sec during the night and 150 cm/sec during the day.

The instrument was cycled with a 2 seconds measurement every two minutes, alternatively lamp 1, lamp 2 and dark current. A telemetry message was sent every two minutes including NO counter signal (12 bits),fluorescence signal from the photomultiplier (16 bits), seven temperatures (ambient , photomultiplier, lamp, up-stream and down-stream chamber, electronics and batteries), ambient pressure and batteries voltage. The data were transmitted by HF to two automatic ground receiving stations in South Africa and New Caledonia and to a satellite data collection system providing also balloon locations 5 to 6 times a day (ARGOS).

The balloon was launched from the grounds of the Satellite Tracking Station of CNES in Paardefontein, near Pretoria on July 21, 1985. It started an eastbound flight path until it came down into the Indian Ocean after 8 days of flight. Due to telemetry problems, scientific data were transmitted only 3 days.