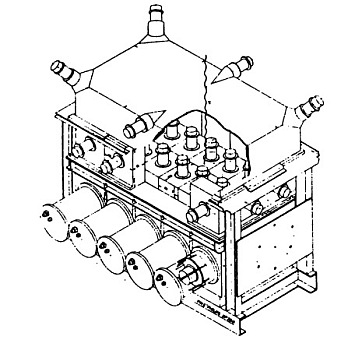 In the figure at left we can see an scheme of the composition of the first iteration of the instrument (click to enlarge). The principal detector of the first FIGARO implementation was an array of 12 NaI(Tl) elements with a thickness of 5 cm and a total geometric area of 4.050 cm2. It was actively shielded against the atmospheric background from the bottom by a plastic scintillator (50 g/cm2 thick), and from the sides by a wall of 14 NaI(Tl) elements (30 g/cm2 thick).

Emission from sources in the large field of view were identified by mean of temporal analysis. Individual pulses, after a 4 bit A/D conversion, were transmitted with a time resolution of 25 microseconds. An independent backup channel transmited counting rate on the same intervals with a 2 microseconds integration time. A pointing system allowed the maximum exposure to favorite candidate sources by altazimuthal tracking with precision better than 1 degree.

Only marginal data was obtained during the initial ascent of the flight until balloon burst occured.